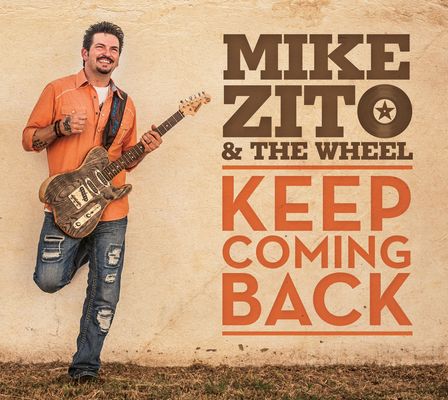 Mike Zito has walked many roads. At 44, his backstory is a travelogue that starts in Missouri and finds salvation in Texas, pinballs from solo career to supergroup (and back), dices with both death and glory. And yet, wherever his career leads him, Mike always returns to his founding values of honest, original songs, drawn from the emotional depths, twisting the great American genres into bold new shapes. Keep Coming Back is all in the title, explains the songwriter of his latest release on Ruf Records. I love the blues, I love rock ‘n’ roll and I love country music. It’s what I do and who I am.

Perhaps there were some sceptics who questioned Mike’s amicable departure from the Royal Southern Brotherhood last year, after two acclaimed albums that took the A-list outfit to the top of the world. Released in 2015, Keep Coming Back is both the explanation and vindication for that decision. This album brings me back to what it’s all about, says Mike. Having fun and playing music you love and believe in. It’s all about the song.

Tracked in June at Dockside Studios, Louisiana, the album reunites Mike with The Wheel lineup of Jimmy Carpenter (saxophone/vocals), Scot Sutherland (bass), Rob Lee (drums) and Lewis Stephens (keys), with producer Trina Shoemaker and engineer David Farrell bottling the chemistry. Trina and I were simpatico in our ideas of what this album would sound and feel like, recalls Mike, and she nailed it. This album is raw when it needs to be, subtle, sincere and grooving all the way through. My band are in top form. The musicians gave their all to the songs and brought out the best in me.

And so, in 2015, Mike Zito sets off down yet another road, surrounded by a new band of brothers, armed with an album that’s brimming with mojo and driven by fresh momentum. I hope you enjoy the trip through the roots of American music in Keep Coming Back, he says. I can honestly say this was the most joyful album I have ever recorded…