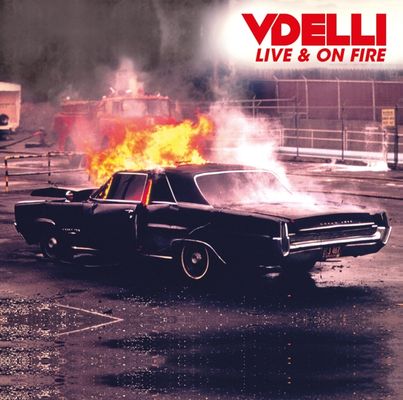 VDELLI are a unique three-piece rock band of rare quality and substance.

The trio started constant touring in Europe, building up a loyal fanbase. In 2007 VDELLI co-headlined the Fehmarn Festival in Germany playing in front of 30.000 people. Soon after, German indie-label Jazzhaus Records signed the band and released Ain't Bringing Me Down (2009), which was recorded under the guidance of producer Kevin Shirley who is known for his work with such great acts as Led Zeppelin, Aerosmith, Iron Maiden, Journey, Black Crowes, to name a few. The follow-up Take A Bite (2010) shows a more versatile side of the group and combines elements of blues-, indie- and mainstream rock. The two albums have already been making a significant statement amongst rock listeners and have both been voted among Best Rock Albums Of The Year by German Rocks magazine.

Over the years, one of VDELLIs greatest strengths has been their consistently high-standard live presentation and performance. With over 150 gigs a year and 16 tours throughout Europe since the band started, VDELLI has to be considered one of the most hard-working bands around and most critics are found wanting to find superlatives to describe this astounding live act. The current line-up features singer and guitarist Michael Vdelli, a charismatic frontman whose vocal diversity ranges from smooth, soulful, bluestones to the voice of a Rock n Roll madman about to explode.

Combined with his powerhouse guitar playing, Michael has a stage presence that continues to captivate audiences. He is considered by many industry insiders and fans alike to be one of the shining lights in the genre. On drums, the group features Ric Whittle, a master drummer with a lifetime of experience on his instrument that is immediately evident from the first bar he plays. Lightning chops and brutal energy, combined with taste and class give a clue as to what to expect from this heavyweight of contemporary drumming. Bass player Leigh Miller has joined the band in 2010. Sharp witted, with boundless energy and always affable, Leigh brings to the band not only the solid groove and pump orientated playing the group requires, but also a personality that fits perfectly into the pressure cooker situation that is VDELLI. This collaboration stimulates highly improvised performances in a hard rock fusion of blues and funk influences.

Live & On Fire, the new VDELLI live album, was recorded live at the Indian Ocean Hotel in Scarborough, Western Australia in November 2013, Live & On Fire is the group's first live album featuring the current line-up with Michael Vdelli on guitar and vocal, Ric Whittle on drums and Leigh Miller on bass and backing vocal.

Live & On Fire contains songs from the previous studio albums Never Going Back, Take A Bite and Ain't Bringing Me Down, plus the two previously unreleased songs Newtown and Tapestry Of Randomjams.