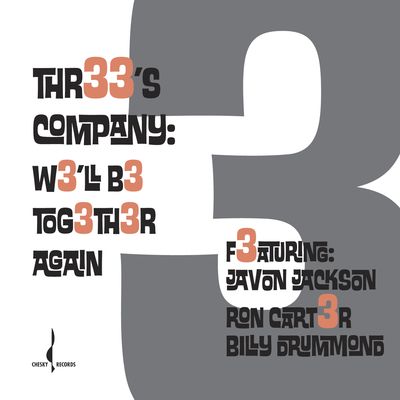 We'll Be Together Again

The shadows of the Sonny Rollins trio and Joe Henderson trio (both having recorded classic albums at the Village Vanguard) hover over this sparse, revealing trio outing with Jackson, Carter and Drummond. And like his sax playing elders, Jackson put his own stamp on a set of well chosen jazz standards while also showcasing a few originals. “Sonny being a big influence on me, obviously there would be some things in there that would be reminiscent, or have that spirit anyway,” says Jackson, who just hit the half century mark this June.

And while playing without a chordal instrument was a challenge in some respects for the saxophonist, he explains that Carter’s presence more than made up for the absence of piano on this Chesky release. Ron is kind of like a symphony behind you. He’s the bass player, but he’s the piano at times, he’s the drums and he’s out front with the melody. So he can be several things at once. With him there, there are so many colors that are available to me. So it’s not out of disrespect to the piano, it’s just that with Ron, we have a lot of opportunities. This trio setting just allows him to kind of roam a little bit and be more of a free safety, to use a football analogy.

Part of the Chesky Binaural + Series, all recorded with a single microphone, the band appears right before you with this spacious, lush and multi-dimensional recording. Now headphone users will hear the same three-dimensional sound and imaging as audiophiles have for the past 25 years with Chesky Recordings. Also these new Binaural+ Series albums capture even more spatial realism for the home audiophile market, bringing you one step closer to the actual event. You will hear some of the most natural and pure cool Jazz music ever recorded.