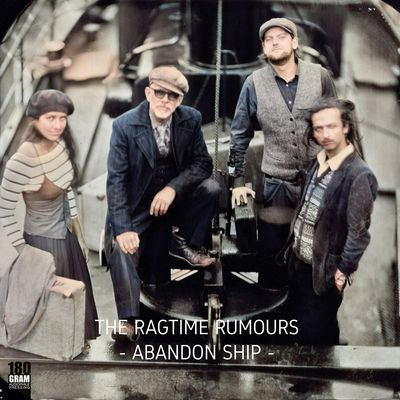 Rules are there to be broken. Genres are there to be blurred. Perhaps you thought The Ragtime Rumours could never top the fearless alchemy of 2018’s debut Rag ’N Roll – a rebellious collision of vintage blues, offbeat rock ‘n’ roll, gypsy-jazz and quirky storytelling. But with this year’s Abandon Ship, you’ll be happily proved wrong. “In our opinion,” say the band, “Rag ’N Roll was the appetiser and Abandon Ship is the main course.”

Amongst the five-star reviews for Rag ’N Roll, there was one recurring complaint from the purists (“We often hear that ‘this isn’t real blues’”). But for a band this open-minded – with influences spanning from Robert Johnson and Tom Waits to Pokey LaFarge and Django Reinhardt – that criticism was practically a badge of honour. And while Abandon Ship was tracked at Kink Studio and Dog Licks Recording in the Netherlands, it’s a pleasure to find yourself back in The Ragtime Rumours’ idiosyncratic world.

Lose yourself in a lyrical landscape of dancing girls, moonshine and Cadillac salesmen, and dive into a production where anything goes. “We experimented a lot with sound,” remember the lineup. “After a million changes, this album became exactly how it was meant to be.”

Blues purists be damned. Abandon Ship is music without limits, for listeners without blinkers. “We think rules are meant to be broken,” say the band. “And we love breaking the rules…”