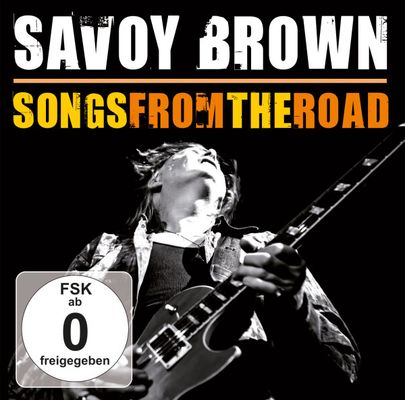 Released in April 2013 on Ruf Records, Songs From The Road is a two-disc CD/DVD set that captures the feeling of the 1960s. It’s also the release you’ve been waiting for. Back in 2011, Simmonds found himself on top of the world, as critics and fans alike poured praise on Savoy Brown’s latest release, Voodoo Moon. With stinging material like Meet The Blues Head On and She’s Got The Heat, this was the kind of studio album you were desperate to hear live, and label boss Thomas Ruf agreed, enlisting Savoy Brown as the latest in Ruf’s famous Songs From The Road series that has showcased artists from Jeff Healey to Luther Allison. And so, on May 5, 2012, a fleet of cameras and soundmen – along with a vocal crowd of lucky über-fans – descended on the Musiktheater Piano in Dortmund, Germany, for a one-night stand they’d never forget.

It’s fair to say, the band nailed it. Like all the great live albums Songs From The Road is a snapshot that puts you on the front row when you hit ‘Play’ in your front room. From the moment that Simmonds and his world-class lineup tear into the brassy groove of 24/7, with the molten guitar riffs rolling off those famous fingers, the Dortmund crowd are up, dancing and lost in the music. Fourteen songs later, a stinging finale of Louisiana Blues leaves them howling for more. This is one of blues-rock’s great stage bands, caught at the top of their game.

This latest release is all about the here-and-now, fuelled by the flashes of inspiration that still strike Simmonds while his peers live off past glories. Keep growing, says Simmonds of his musical philosophy. That’s what I’m trying to do. I’m proud of the past, but if you dwell too much on the past, it’ll drag you back and you’ll live in the past. So what I try to do is just think about the moment. And the best place to think about the moment is on the stage…