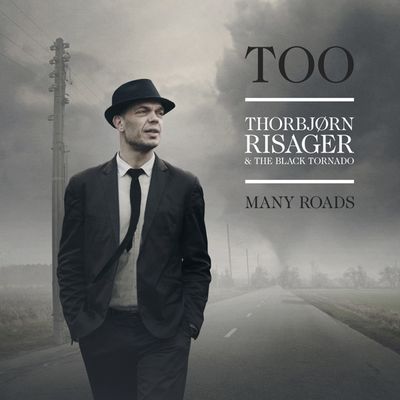 and’s little practice room in Copenhagen’s Vesterbro district. It’s a classic setting, with instruments everywhere, the obligatory ashtrays and empty beer cans, and the total absence of vacuum cleaners and cleaning agents. It looks like one of those familiar music rooms in a state of creative chaos where dreams thrive, but where actually hitting the road and turning dreams into reality is a different story.

Here, however, things are the complete opposite. Thorbjørn Risager and his band are light years away from any dream state. They belong to the top strata of the Danish music scene, making themselves heard like few others. But hey, how can it be that an eight-man band, which has been around for ten years, playing rock, blues and soul, is releasing its eighth album, selling lots of records and plays nearly a hundred gigs a year – most of them abroad? What is it that these guys have that makes their audience go on growing and keeps the pot boiling? As Thorbjørn Risager says, it’s due not least of all to the fact that all the band members approach their job with a hundred-percent professional attitude. Everyone contributes to the common cause, and each has his own task in making the result a success.

Still, this doesn’t explain everything. Thorbjørn Risager is the natural midpoint in the group. And he happens to be one of the best blues singers Denmark has ever reared. His raw, expressive voice is the fuel that powers the band’s mighty blues motor.

But more than a formidable voice is needed for this vehicle to stay in the fast lane. The songs furnish the rich, thick oil lubricant that is topped up regularly. The rhythm section are the pistons that never fail, while the two guitars supply the masterly electrical features. And then there is the horn section, providing the elegant design that rounds out this blues vehicle’s roadworthiness and comfort.

Last, but not least, there is the band’s worldwide booking agent, Swedish Annika Westman, who began working with the group in 2005 and since then has provided 500 concert gigs. I want to give Annika plenty of credit. She’s really good at what she does, Thorbjørn Risager emphasizes. But she also says she has a good product to sell!

Check out the band’s calendar for 2014. You don’t acquire such an extensive tour schedule unless you have an audience and something to offer. This is totally awesome, says Risager, referring to the band’s momentum and the prospect of a(nother) year packed with concerts in Germany, Sweden, Norway, Austria and other countries, as well as numerous jobs at prominent Danish venues. Seven or eight years ago I never would have imagined we’d get to where we are today, he marvels. This may be true, but a large part of the explanation can be found in Risager’s past. And there was also his eureka moment with David Letterman …

I’ve played music since I was 16. I was already playing paid gigs in high school. I had loads of self-confidence as a singer and practically went around waiting for someone to discover me. But in reality, I had yet to fathom what it was I needed to do.

It became clear to me one night when I was watching the David Letterman Show. He had a slogan every evening where he said: ‘I promise we will make the show better as soon as people start watching.’ I realized that, wow, this was exactly what I’d been thinking: that when I got discovered and landed a record contract and was offered big jobs, then I’d get my shit together. That the day I get an audience will be the day I show the world how good I am.

Suddenly I understood the concept. You’ve got to create it yourself, else it won’t happen, says Thorbjørn Risager. Thus began the Thorbjørn Risager Band, back in 2003. The protagonist plugged his guitar into his amplifier and began writing his own songs. A clear profile of blues, soul and roots-rock emerged, and he was never a moment in doubt as to how the band should sound. An old B.B. King record showed him just what he needed - a big sound with a horn section – and that’s what happened. Today the eight-man band consists of practically the same line-up as when it first began rehearsing over ten years ago.

For this latest recording, the band assembled a strong team for its recording session at the Medley Studio in Copenhagen, with Søren Andersen as engineer and Jesper Yebo Reginal in charge of mixing. This time the band has chosen to produce the album itself. We’ve always had producers on our earlier albums, including Billy Cross and Lars Skjærbæk. This time we have taken the big leap of doing the producing ourselves. We’ve put together twelve very strong songs where blues, rock and soul melt together, says Thorbjørn Risager.

Too Many Roads is the natural next step for Thorbjørn Risager & The Black Tornado. Not just because faithful fans will buy it, but also because it reflects the artistic ambitions, the song writing, and the band’s development as a whole. The songs work better than ever, says Risager, and the sound is the best we’ve had so far.

Audiences like what they do. So do critics and music venues. Which is why Thorbjørn Risager & The Black Tornado – as they’re called today – keep returning time after time to the blues clubs in Sweden, Norway and Denmark, and to festivals and clubs throughout Europe. New venues are added to the list all the time, proof of which can easily be found in their extensive tour plan for 2014.