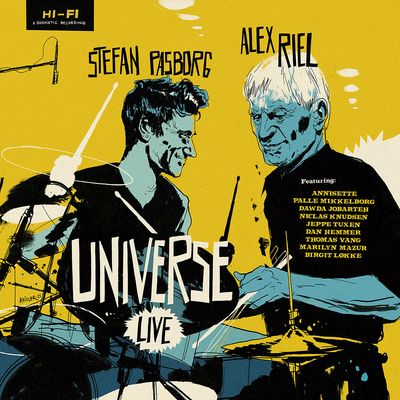 They move through a universe with a mutual appreciation and love for drumming in all its many forms – from older, more traditional percussive roles to modern jazz and free improvisation, from groove music to rock music. And together, they create a universe in which their playing inspires, excites, impresses, and delights audiences and listeners.

“We both laughed and cried when we listened to the tapes to choose the music for the album. There’s some nostalgia in it. It’s a souvenir and a documentation of some of what Alex Riel and I have had together,” says Stefan Pasborg.

Alex Riel (born 1940) is the literal Godfather of Stefan Pasborg (born 1974). Their shared history is rich, having developed a close musical and personal friendship together over many years. Alex Riel was a teacher to the young Stefan, and since then they’ve become peers. In 2017, they received one of the most prestigious honors in Danish music, the Gudman Prize – together, as co-winners.

When they first began performing together back in 2006, it was as a duo. The younger musician's powerful drive met the more laid-back energy of the veteran, and despite their differences, the musical connection between the two created a fascinating listening experience for audiences.

For the last decade, the drumming duo has been playing and touring with a larger group. The bigger band was initially formed for a concert at Skuespilhuset in Copenhagen in 2009, and continued to develop over many years and performances, since. This album is a collection of sounds and musical selections from five concerts between 2009 and 2018, an auditory collage with each element carefully chosen and now released for listeners everywhere to enjoy.

Alex Riel has played with pretty much everyone throughout the history of Jazz music in a legendary career that spans decades – along the way, developing and refining his famously original and responsive voice on the drums. He’s a fundamental figure in the Danish jazz story, not only contributing to the music in Denmark, but also playing a vital role in bands with European and American greats as well.

He was performing with some of the latter in the 1960s during his time as the drummer in the house band at the famed Jazzhus Montmartre in Copenhagen. During that period, coryphaei like saxophonists Dexter Gordon and Ben Webster not only passed through the Nordic jazz haven, but were among the iconic American instrumentalists who relocated to the city.

It was also in the 60s that Alex formed the Riel-Mikkelborg quintet (with Danish trumpet luminary Palle Mikkelborg) and established The Savage Rose, a band with the eminent Annisette in front on vocals. When Riel and Pasborg were considering who to invite for their concert in Skuespilhuset in 2009, the older pro suggested Mikkelborg and Annisette, noting that some of his greatest musical experiences had been with them.

Trumpeter Palle Mikkelborg (born 1941) has distinguished himself as an original and innovative artist who perceives music as sacred, spiritual territory in life – while living and loving to challenge musical traditions in both his playing and thinking. Annisette (born 1948) has been a unique and seminal presence in Danish Beat and Rock music, with an unmistakable strength of sound that makes hers one of the most powerful and identifiable voices in the world.

For Stefan Pasborg, playing with Annisette offered inspiration: “It was great to perform with her. Every time she opened her mouth and sang, it was as if she was singing for her life. That was also the case in the rehearsal room before we went on stage. The rest of us could feel that we’d damn well better pull ourselves together. She has primordial power.” Pasborg is a physical and versatile drummer who has chosen own path and honed his own voice and skillset as an important contributing member of the experimental music scene. He has distinguished himself as an excellent instrumentalist who has performed around the globe with Miroslav Vitous, Enrico Pieranunzi, Marc Ducret, Ray Anderson, and Tomasz Stanko, as well as Danes John Tchicai, Carsten Dahl, Dawda Jobarteh, Oh Land, and many others. He has received numerous awards for his music and musicianship, which has been called both God-fearing and world-class, or as American Hammondbeat put it: ‘To anyone who appreciates drums and percussion at ist best, listen carefully to Stefan's work and be amazed.’

For his contribution to the concert back in 2009, he looked to his musical partners in Ibrahim Electric – a high-spirited trio with members who have achieved a synergy and mutual joy of playing through two decades of stage and studio experience together. In addition to Pasborg, the band features Niclas Knudsen on guitar and Jeppe Tuxen on hammond organ. The inclusion of the organ in the newly created Riel/Pasborg group was also a nod to Alex’s history with the instrument in The Savage Rose.

This album, ALEX RIEL & STEFAN PASBORG UNIVERSE LIVE, features Palle Mikkelborg and Annisette, as well as Thomas Vang on bass, Dan Hemmer on organ, Marilyn Mazur and Birgit Løkke on percussion, and Dawda Jobarteh on kora. The music unfolds itself into the far corners of the Universe they’ve created in a repertoire that includes free improvisations, intense grooves, and arrangements that explore material written by Palle Mikkelborg, Charles Mingus, Thomas Koppel, and Charlie Chaplin, among others.

For this project, Alex Riel and Stefan Pasborg tuned their drums so that the sounds and pitches from each kit wouldn’t interfere with the other. Stefan’s drum set is tuned lower and deeper than Alex’s, or in other words: Pasborg’s drums sound more rock-like, and Riel’s more jazz-like. This helps allow listeners distinguish one from the other, for additional layers and levels of enjoyment.