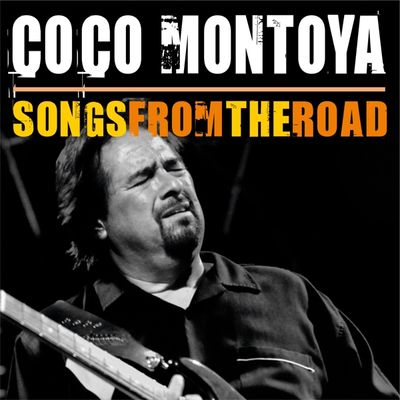 By now, you’ll doubtless be familiar with Ruf Records’ Songs From The Road concept. In 2014, this latest release sticks to the winning formula, showcasing a classic Coco Montoya show at Seattle’s famous Triple Door venue on August 17, 2012 and August 18, 2013 with producer Jim Gaines taking charge of a mix that’s as potent as the performance.

Alongside Jim Gaines, Coco had a dream-team of compadres flanking him that night in Seattle, with Brant Leeper swirling it up on keys, Nathan Brown holding it down on bass and Rena Beavers driving these 14 songs from the drum throne. For the fans, needless to say, the star of the show was the man at the mic with the iconic upside-down electric guitar, streaking through a solid-gold setlist of originals that left the Washington crowd breathless. Coco has rarely sounded better.

Needless to say, his band work from those early years is exemplary, but in 2014, Songs From The Road mines the material that Coco has written since striking out on his own in the mid-’90s, rocket-fuelling 14 of his best solo songs. From 1995’s Gotta Mind To Travel album, you’ll find a live reading of the grooving title track, alongside the irrepressible Love Jail and the poignant Too Much Water. From 1996’s Ya Think I’d Know Better, there’s the reflective groove of You’d Think I’d Know Better By Now, while from the following year’s Just Let Go, you’ll find stinging finale My Side Of The Fence.

Signing with the Alligator label in the post-millennium, Coco’s solo stock continued to rise, and those albums are also well-represented on Songs From The Road. From 2000’s Suspicion, listen out for the choppy, Stones-flavoured riffing of I Need Your Love In My Life, alongside a tough-but-tender take on I Wish I Could Be That Strong. From 2002’s Can’t Look Back album, there’s the funk-edged I Won’t Beg, while sprinkled through the tracklisting, you’ll also find a hat-trick from 2010’s Ruf debut, I Want It All Back, with the mellow The One Who Really Loves You, the walking blues of Fannie Mae and the sunkissed rhythms of Hey Senorita.

If you dig the studio cuts, then you’ll love these live readings. And if you’re yet to discover the genius of Coco Montoya, Songs From The Road’s cherrypicked setlist is a great place to kick-start your collection. Play it loud.