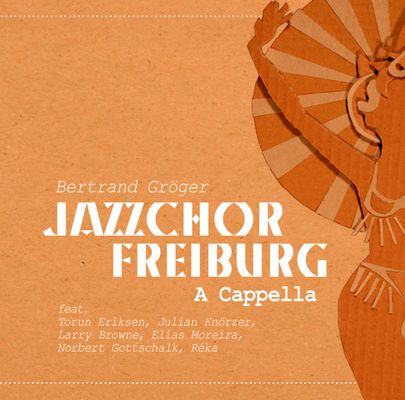 Since it was founded two decades ago, Jazzchor Freiburg has always excited its audiences in Germany and abroad, convinced juries of international competitions, and gotten renowned soloists on board. Under the direction of its founder Bertrand Gröger, the choir remained so successful with the accompaniment of its band; the perfect balance between choir vocals and rhythm combo remains the trademark of Jazzchor Freiburg.

But now, the renowned choir has produced its first purely a cappella CD.

In 11 arrangements specially written for A Capella, the choir once again demonstrates its wide range of styles and its legendary drive, but this time in the most challenging discipline of choral singing.

Swing, Latin, ethno, funk, singer-songwriter pop, and crossover: under the direction of its founder Bertrand Gröger, Jazzchor Freiburg is taking a cappella into uncharted waters for German choirs.

From the beginning, Jazzchor Freiburg's concept has always included a select group of soloists, and a number of well-known singers can also be heard on A Capella. Norway's Torun Eriksen, who has been on tour with the choir numerous times, is on board, as is Larry Browne of Les Voice Messengers and scat legend Norbert Gottschalk.

Julian Knörzer of Acoustic Instinct and Unduzo fame has been a member of the choir for years, and he also displays his virtuosity on this CD to help Jazzchor Freiburg swing and groove.

The producer is Jens Johansen, director of the legendary Danish choir Vocal Line; he ensures that the choir's sound is fresh, precise, and natural.

From the opener – Kirby Shaw's eponymous classic A cappella – the choir leaves no doubt that its goal is not to use the latest technology to come up with an unnaturally sleek sound; rather, the vibrant energy that Jazzchor Freiburg conveys to its live audience is fortunately also conveyed in these recordings.