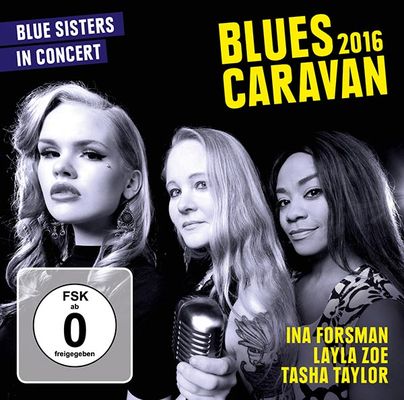 Atmosphere. It’s the magic ingredient that turns a good live album into a great one – and it comes spilling from the speakers on Blues Caravan 2016. This CD/DVD release puts you right there, in the heart of the crowd, on the hottest tour of the year, feeling the anticipation rise as the clock ticks down and the compère steps up: Ladies and gentlemen, the Blue Sisters…!

The Blue Sisters: an international bill taking in Finland’s rising star Ina Forsman, American R&B royalty Tasha Taylor and Canada’s celebrated singer-songwriter Layla Zoe. Now, with the release of Blues Caravan 2016, recorded February 22nd at the Hirsch club in Nürnberg, Germany, all the thrills of that tour come flooding back.

Naturally, Ina’s Blues Caravan set draws on that album’s self-penned material – from the jazzy Hanging Loose to the hooky No Room For Love – but her spontaneous approach to stagecraft means that anything could happen.

Few performers can work a crowd quite like Tasha Taylor. Just wait until you hear her on Blues Caravan 2016, as Tasha rocket-fuels Biscuit cuts like Weatherman and One And Only, and even salutes Taylor Senior with a cover of his famous Who’s Making Love.

A truly prolific talent, Layla Zoe has won global acclaim for her ten-album back catalogue, with 2013’s The Lily dubbed thrilling by The Blues and this year’s Breaking Free praised for ist passion and integrity. But if you only know her studio albums, you’ve only heard one side of the coin.

Three hot-tip performers. Three unforgettable sets. But of course, this wouldn’t be the Blues Caravan without the traditional onstage hook-up, and as the Blue Sisters unite to play us out with a climactic Rock Me Baby, you’ll be howling for more.