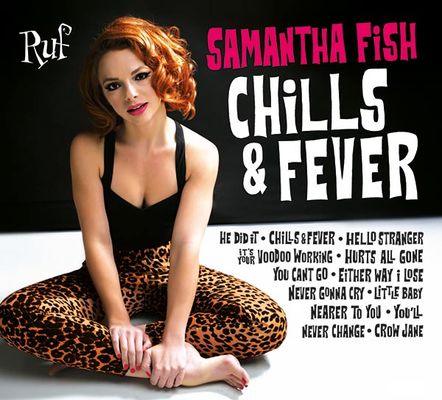 Chills & Fever, Samantha Fish ventured off in another new direction, one she was exploring for the first time in her career. She traveled to the land of the legendary Motown Detroit and joined forces with members of the Detroit Cobras, a band whose insurgent ethic has made them darlings of the Midwest punk/blues scene. The two entities -- which included Joe Mazzola on guitar, Steve Nawara on bass, and Kenny Tudrick along with Bob Mervak on keys, and the New Orleans horn section featuring Mark Levron and Travis Blotsky on trumpet and saxophone -- bonded over a common love of classic soul and rollicking rhythms, so much so that the results testify to a seemingly timeless template. Covering songs from the ‘60s and ‘70s -- indelible melodies from the pens of legends like Jackie DeShannon, Jerry Ragavoy, Bert Berns and Allen Toussaint -- along with producer Bobby Harlow (King Tuff, The Gap Dream, White Fang), a member of the Detroit band The Go, which also featured Jack White prior to his stint with the White Stripes. With that as her starting point, Fish and the band then created an album that’s best described as a pure slab of rocking rhythm n’ blues.

It’s a lot less restrained style of music than the sound people may be used to hearing from me, but it’s definitely a different facet of my personality. It’s far more straight forward. Still, nothing she’s done before can prepare her faithful fans and followers to the seminal sounds of Chills & Fever.