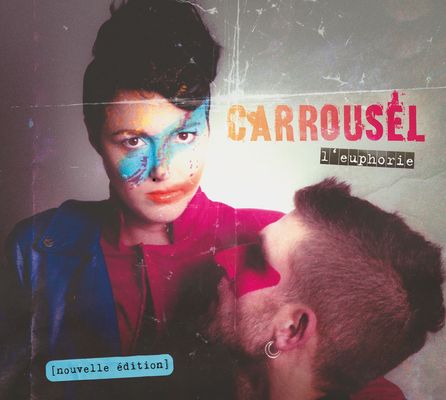 What happens when a singer and multi-instrumentalist from the land of savoir vivre teams up with a male counterpart of the happiest country in the world (World Happiness Report 2015)? A pretty large portion of endorphins should be distributed to the audience, right? With Sophie Léonard and Gogniat Burande this is, in fact, the case. The duo, who has, from the Swiss Jura, strongly mixed up the Neo-Chanson scene, is now releasing their new, third work and have very confidently named it L’Euphorie.

After a large boost in popularity both in the French-speaking as well as German-speaking Switzerland, and appearances at Paléo, the Montreux Jazz Festival and over 450 other dates and after a short pit stop, Carrousel is now is back with new drive. The third disc was produced under the creative supervision of Jean-Louis Pierot, who has worked the sound mixer in France for the greats such as Bashung or Étienne Daho. We wanted to again virtually start from scratch, in order to preserve our freshness, says Sophie.

This fresh, is felt immediately in the opener and at the same time in the single Eva, with ist incisive melodic riff and the twang of the guitar. This song portrays a turbulent, self-confident, life loving personality, something like the godmother for the euphoric cycle of the 13 songs. It continues on with the atmospheric Reviendra that is carried by broom percussion and the circular sound of accordion lines in the Chanson. Ukulele and chimes accompany the listener in Dans Le Prochain Express and with Faire Face Á L’Horizon and Le Virage the duo has two successful ballads packed away, that bring new piano qualities to their sound. Sur Un Volcan harbors a surprise with ist tango-like bonds which soon dissolve into a rock-like melody.