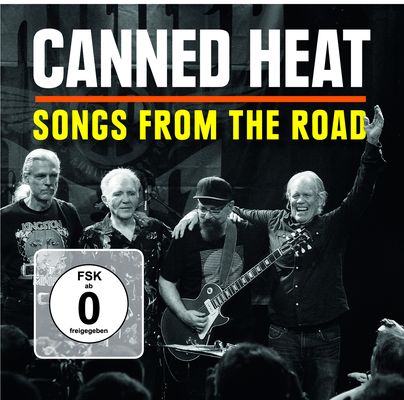 The world turns. Fashions change. Bands rise and fall. But you can’t stop the boogie. Fifty years after Canned Heat was founded by blues scholars Bob ‘The Bear’ Hite and Alan ‘Blind Owl’ Wilson in Topanga Canyon, California, the West Coast legends just keep rolling on down the road. We’re all amazed and thankful that we’re still here, explain the band, living our dreams of making a living doing what we all love. Playing the blues, travelling the world and giving a taste of the boogie to audiences everywhere.

Until they pull up in your town, there’s Songs From The Road. The famous Ruf Records live series has already showcased heavyweights from Luther Allison to Royal Southern Brotherhood. Now, in 2015, this two-disc CD/DVD set finds the modern Canned Heat lineup on blistering form, shaking Bonn’s Harmonie club with a 16-song set driven by the boogie groove that’s practically a strand of rock ‘n’ roll’s DANN.

Led from the back, as ever, by iconic drummer and guardian-of-the-flame Adolfo ‘Fito’ De La Parra, the rhythm section is given further pedigree by Sixties bassist Larry ‘The Mole’ Taylor. On lead vocals and harp, give it up for New Orleans legend Dale Spalding, while John ‘JP’ Paulus capably covers guitar duties for Woodstock-era bandmember Harvey ‘The Snake’ Mandel (as he recovers from recent health issues). It’s a capsule, explains manager and producer Skip Taylor, of where the band was at on that particular night.