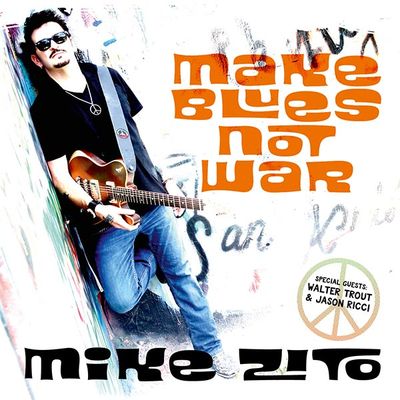 Modern life moves fast. Rolling news. Rapid-fire tweets. A relentless barrage of (mis)information. Make Blues Not War is an album that demands you sign out, log off and turn yourself over instead to the old-fashioned pleasures of great music. “We hear about everything 24/7 now,” says Mike Zito. “The news never stops and it’s all become propaganda. But when you turn off the news and turn on some blues, the world is a beautiful place. I think music is the cure for all ailments. Always has been. Always will be.”

Released in 2016 on Ruf Records, Make Blues Not War is Mike’s second release since leaving the mighty Royal Southern Brotherhood, his 13th overall – and perhaps his most energetic to date.

That atmosphere of positivity began at the album sessions, as Mike tracked alongside Grammy Award-winning producer (and co-writer) Tom Hambridge at the Sound Stage Studios in Nashville, Tennessee. Now comes Make Blues Not War: another step up for this fascinating journeyman. “I’m so proud of this new album,” says Mike. When it comes to Mike’s lyric sheet, these songs search for the silver lining in a troubled world. “I love writing songs and sharing deep feelings,” he says, “but I also like having fun and cutting loose – that’s what this album is all about.”