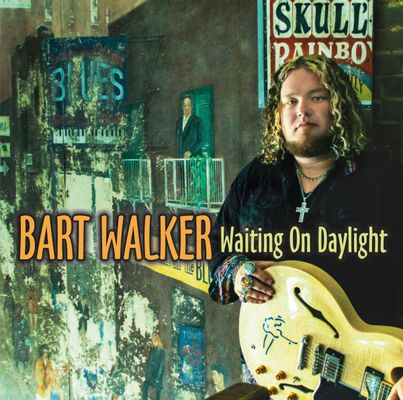 Nashville is known worldwide as the capital of country music. But any fan of gutty, southern-fried blues will be thrilled by one of that city's newest musical imports, Bart Walker. Both an incendiary guitar player and a gifted storyteller, Walker channels a wealth of influences from the blues and classic rock arenas on his explosive Ruf Records debut, Waiting on Daylight, produced and engineered by multiple Grammy Award winner Jim Gaines. The album comes on the heels of Walker's victory at the 2012 International Blues Challenge (Gibson Guitarist Award) and his well-received, self-produced debut Who I Am. When we started out with this new record, says Walker, I was constantly thinking about how I was I gonna top the last one. About 20 minutes into the session, Jim showed me how that was gonna happen.

Walker isn't yet a household name, but he's not a newcomer, either. A guitar player since the age of four, he’s already logged plenty of road miles as the right-hand man to country-rocker Bo Bice and collaborated in the studio with such heavyweights as Steve Gorman (Black Crowes), Audley Freed (Cry Of Love, Black Crowes) and Robert Kearns (Cry of Love, Lynyrd Skynyrd). He's played with Stevie Ray Vaughan's original back-up band Double Trouble and until recently had Double Trouble keyboarder Reese Wynans as a regular member of his own touring outfit.

With that kind of resume, expectations were high when Walker journeyed across the state to Jim Gaines' studio in Stantonville, Tennessee in the fall of 2012. There, he hooked up with the first-call Memphis rhythm section of Steve Potts on drums and Dave Smith on bass – a duo that has already graced albums by Luther Allison, Jonny Lang, Michael Burks and countless others. The eleven songs Walker cooked up with this pair of studio veterans (as well as keyboarders Rick Steff and Dave Cohen on selected cuts) manage to exceed those lofty expectations.

Waiting on Daylight opens with the funky blues groove of It's All Good featuring a vocal that instantly recalls Louisiana swamp man Tab Benoit. A couple of tracks later, on Took It Like A Man, echoes of southern powerhouses ZZ Top and the Allman Brothers begin to seep through. Those are definitely some of my most favorite artists, along with my all-time favorite guitar player, Stevie Ray Vaughan, explains Walker. But honestly, I have so many influences from so many genres. Guns 'n' Roses, Zeppelin, Jack White, Doyle Bramhall II, Warren Haynes … the list is 100 miles long.

As things progress through rockin' tunes like the Chuck Berry-flavored Happy, J.B. Hutto's Hipshake It or the introspective Mary and Me, it becomes harder to ignore what is unquestionably one of the album's biggest strengths: a big, fat, gritty, greasy guitar tone massive enough to take hold of your soul. Walker confirms this is no accident. If it doesn’t have the big fat beefy tone, then I won’t play to my fullest potential, says the self-professed tone freak – who then runs off a list of the roughly dozen different guitars he used to get just the right sound on each particular cut.

The man on the other side of the mixing desk is also renowned for the satisfyingly rich tone and classic performances he has coaxed out of players as diverse as Carlos Santana, George Thorogood and (there's that name again) Stevie Ray Vaughan. For Walker, joining that illustrious company made the collaboration with producer Jim Gaines truly special. I really felt like I had accomplished something when Jim Gaines turned around in his chair and looked at me while we were listening down to some of the tracks and said: Man, we got us a really rockin’ record!

There's really not a lot more to it than that. Waiting on Daylight, for all its rough-and-tumble energy, is by no means heavy-handed. Walker and Gaines know enough to avoid tiresome, excessive displays of guitar prowess and instead allow this collection of well-constructed songs to breathe. And yet, at the end of the day, Gaines is right.