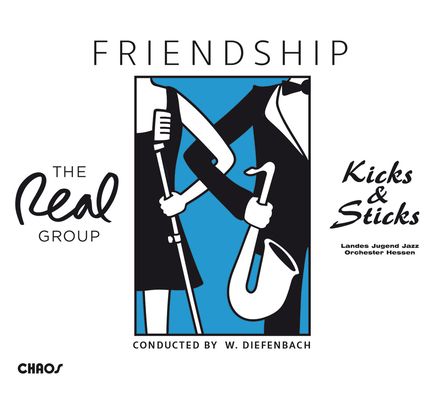 The Hessen State Youth Jazz Orchestra “Kicks & Sticks” was founded in 1985 by the conductor and voice coach Wolfgang Diefenbach with the goal of enabling talented young musicians to receive professional big band training at the highest level.

Since then, more than 2.000 musicians have already demonstrated their skills in the Hessian talent factory in performances with well-known jazz stars like Dianne Reeves, Dee Dee Bridgewater, The New York Voices and James Morrison, on worldwide concert tours and international festivals.

The Real Group is one of Sweden's most successful and internationally renowned music groups. Founded in 1984, the groundbreaking vocal group has been touring the world for more than 30 years.

With the voice as their sole instrument, the a cappella quintet has created a unique musical expression in the domain between jazz, pop and Nordic European choir music and has decisively influenced the a cappella / vocal music.

Their wide repertoire and musical excellence have made it possible for the group to collaborate with symphony orchestras, jazz groups, pop bands and notable artists such as Barbara Hendricks, Toots Thielemans and Sir George Martin. This is their first album together with a big band.

For the first collaboration of The Real Group's five spectacular vocal virtuosos with a big band, leading arrangers such as Darmon Meader, Jan Wessels, Mike Mossman and Jeremy Fox could be attracted to write orchestral arrangements of immortal hits such as The Beatles’ Can’t Buy Me Love or Bad by Michael Jackson and chart breaker like Ordinary People by John Legend.