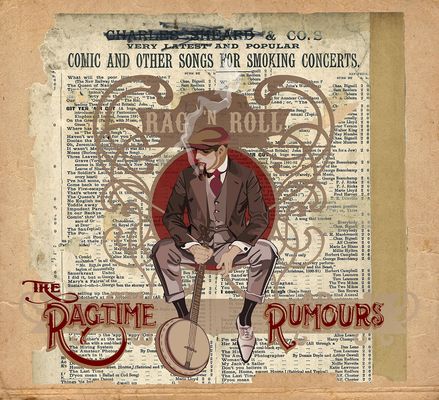 Calling all jaded music-lovers. The Ragtime Rumours have come to prick up your ears. In an era when the dead-eyed music industry clings to tired formulas, these time-travelling Dutch visionaries tear up the rulebook – and that rebel attitude is all over Rag ’N Roll. Anything goes on this revolutionary debut album, as the ghosts of Robert Johnson and Django Reinhardt meet the influence of Tom Waits and Pokey LaFarge, driving eleven self-penned originals and one traditional that could have been written in 1920 or 2018.“We combine our inspiration for ragtime music with the styles of blues, gypsy jazz and rock ‘n’ roll,” explain the band.“We call it rag ‘n’ roll…”

Now, Rag ’N Roll bottles the exuberance and megawatt energy of watching this livewire band from the front row, with a fistful of new songs that confirm The Ragtime Rumours as one of the most creative forces in modern music. Way Too Smart kicks off the tracklisting in style with its high-velocity groove and hard-luck lyric, and the gems keep coming, from the bluesy harmonica-driven stylings of Hookman to the quicksilver Django-worthy guitar licks of The Cigar.

There’s a change of pace with the honky-tonk intro of Stop That Train, while the broken-down jazz of Holly Woedend, sung with heart-rending poignancy by Van Der Schuren, will move you to shivers.“Making this album,” remember the band, “was a lot of nonsense, fun and music, as usual. We wanted this album to sound sincere and organic. It’ll give people the live feel, just like it does onstage.” In a world where you think you’ve heard it all before, The Ragtime Rumours’ talents add up to the freshest debut album you’ll hear this year. This band might roll back the years with their irresistible vintage/modern music – but their time is now.