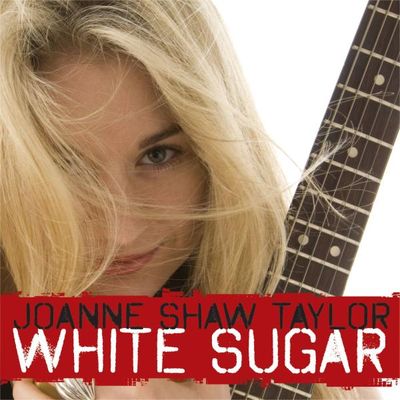 world, I even made a film ´Deep Blues´ where I went to Mississippi and recorded

some legendary players such as R.L Burnside and Jesse -Mae Hemphill. Last year I

heard something I thought I would never hear....a British White Girl playing

When Dave Stewart had his big experience, Joanne Shaw Taylor

was only 16. Her skills at the Telecaster were so perfect that the bluesfan and

Eurythmics-frontman asked her to join his supergroup D.U.P. to tour europe in

2002. She was also offered a record contract but the label went bust. Today

debut: „I wanted to take time out to really work on my craft and make sure that

when I did an album it was the best that I could do.“

For „White Sugar“ Joanne took a plane to Memphis where her

label RUF had booked Jim Gaines´ studio. Jim had worked with some of Joanne´s

idols like Albert Collins and Stevie Ray Vaughan. He brought in the experienced

was totally easy. I knew of them because of Luther Allison and the Jonny Lang

albums. They didn´t know the tracks until five minutes before we recorded them.

I made them listen to the songs once and then play them. It was fantastic. They

got so much feeling and soul. They are amazing guys to work with.“

Shaw Taylor, also at home in Birmingham, where she and her trio play the pubs,

clubs and festivals. „I always wanted to try the power trio thing, like Stevie

Ray Vaughan, the Paladins or Jimi Hendrix. I thought it would bring me on as a

guitar player and a singer – which I think it has done. And“ – Joanne chuckles –

She talks about some influences. When Joanne was a little

schoolgirl, she was caught by the rough side of the blues: SRV, Albert Collins,

the Paladins, Jimi Hendrix. At christmas she got her first electric guitar. The

old classical guitar, which she had played since she was eight, vanished from

the children´s room. „As soon as I heard SRV and Albert Collins I knew pretty

much that I wanted to do that full stop. That was the lifestyle route that I was

goin´ to go down. It was never a hobby. It was always very serious and dedicated

„White Sugar“ is the proof. The confident and young british

woman keeps the traditions of her idols but she is going her own way. With her

herself. Playing the hard stuff à la SRV, making us feel the bite of her

terrain. Funky shuffles, soulful ballads or the hypnotic hookline of the title

track, a burning instrumental, she presents her craft powerfully. Some songs

years ago and are kind of her signature tunes. There is the autobiographical

Day“, a song that Joanne wrote when she was 14. „With ´Blackest Day´ I really

wanted to show my influences.“ She can be proud of her first album. „„She´s my

“She plays with more attitude and flare than most. Massive

“ Catch her live if you can, then you can say: I was there at

“Joanne IS the new face of the blues”