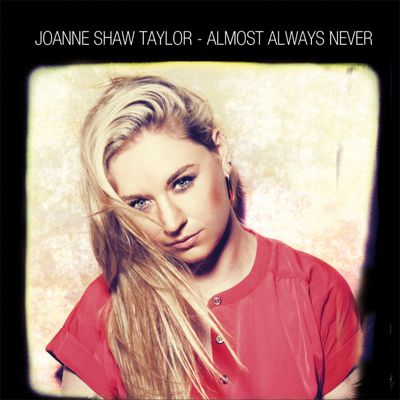 When Annie Lennox paused her Diamond Jubilee Concert performance to let a white-suited, angel-winged blonde fire a soaring Les Paul solo into the sky above Buckingham Palace, uninitiated viewers all asked the same question. Who’s that girl? Needless to say, the music fans and blues-heads in the crowd already knew the answer. It was Joanne Shaw Taylor. The whisky-voiced singer. The midas-touch guitar heroine. The heart-on-sleeve songwriter. And now, the author of a classic third album that will plant her flag as the first lady of British blues.

Released on September 17 through Ruf Records, Almost Always Never is the sound of a bar being raised. Rather than riff on the same themes as her feted past albums, White Sugar and Diamonds In The Dirt, this third collection finds Joanne dodging expectations, writing the songs her muse dictates, diving in at the deep end with just her talent to keep her afloat. Recording in Austin, Texas, these 12 cherished cuts were nailed alongside Mike McCarthy – the producer whose gold-plated CV takes in everyone from Patty Griffin to Spoon – and the crack session team of David Garza (keyboards), Billy White (bass/slide guitar) and J.J. Johnson (drums). As you’ll gather from a cursory spin: they aced it.

“Mike comes from a different musical background from me,” explains Joanne. “He pushed me out of my comfort zone and allowed me to explore new territories. I never thought when I started on this journey that I would ever get to work with such an amazing array of talent. I've been a fan of J.J., David and Billy for years, and their performances on this album are exceptional.”

Ultimately, Almost Always Never is Joanne’s statement. From the savage Les Paul solos of Soul Station to the strutting rock hooks of Standing To Fall, this record will delight the fans who clutch the security rail at Joanne’s gigs, waiting to be scorched by her guitar pyrotechnics. Yet there’s tenderness too, and from her aching suicide-note to a failed relationship on You Should Stay, I Should Go to the title track’s touching refrain of “You crash, you burn/you live, you learn”, this eloquent songwriter has never sounded more open and honest. By the time you reach the slow-burn Lose Myself To Loving You, she has you by the heart-strings.

Faced with this game-changing third album, it’s astonishing to note that this prolific musician is still only in her mid-twenties. It’s been quite a ride. Three albums. Countless shows across the planet. A mantelpiece groaning with awards. Support slots with everyone from B.B. King to Eric Sardinas. And of course, that performance with Lennox in June – watched on television by 17 million viewers.

“There are a lot of great guitarists and singers in the blues today,” says Joe Bonamassa. “What I see in Joanne Shaw Taylor that sets her apart from the rest is the ability to write a great song. Not only is she a killer guitarist and singer, but you find yourself walking away from her shows singing her songs as well.” Here are 12 more songs to get stuck in your head. With Almost Always Never, the precocious blues star has blossomed into a full-grown talent, raised the stakes and given herself the dream setlist for her UK tour in October.

“I’ve loved every album and recording experience I’ve had to date for many different reasons,” reflects Joanne. “I think what sets Almost Always Never apart from my two previous albums is the songwriting process leading up to it. I’m so proud of these songs. All 12 of them combine into one body of work. It’s the perfect and truest example of who I am as an artist to date.”