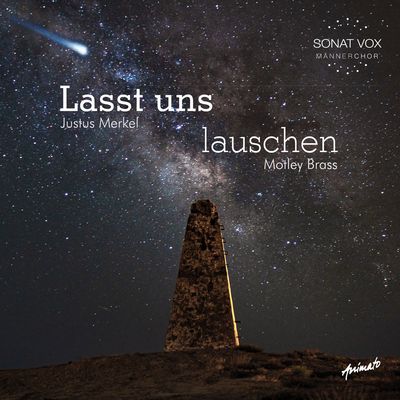 The choir Sonat Vox, consisting of young adolescents, was founded in early 2015. Their line-up with tenor, bass and altus is unique and creates an out-standing sound, all based on a common training and experience and developed for years in their youths. Justus Merkel is the ensemble’s conductor and a student of Prof. Hans-Chrisoph Rademann at the Carl-Maria von Weber University in Dresden.

He was born 1996 in Ansbach. He experienced his basic music training since 2005 at the well-respected and conducted by Karl-Friedrich Beringer Windsbacher Knabenchor. In this time he sang at almost 750 inland and abroad concerts. As tenor soloist he took part at the debut performance of „Sonat Vox Laetittia“ under Lehmann-Horn’s conduction as well as the first recordings of Johann Staden’s religious pieces.

After his A levels in 2014 he supported Martin Lehmann’s, who later on took the leadership of the Windsbacher Knabenchor, daily rehearsals and vocal trainings.

With this album together with the brass quintet Motley Brass, they interpret christmas repertoire but also german traditional songs like works of F. Silcher and a cappella music like G. P. Palestrina, F. Schubert or R. Mauersberger.

Sonat Vox performs numerous concerts annually under the musical direction of Justus Merkel in churches and concert halls, including in Berlin, Frankfurt, Würzburg, Munich or Erfurt. In addition to the regular performance calendar, the choir in ist now three-year existence has already won various competitions. In 2016, Sonat Vox achieved both the first place in the men's choirs category, as well as the special prize of the Hessian Prime Minister at the Men's Choir Festival Limburg. After the choir had qualified with the 1st place at the Bavarian preliminary round for the German Choir Competition of the German Music Council, the singers were able to convince here and secure their 1st place in May 2018. In 2016, the choir around Merkel produced the first CD "Ubi Caritas Et Amor Deus Ibi Est" on the label Animato (2017). Another highlight since the founding of Sonat Vox was the collaboration with Prof. Vytautas Miškinis in the summer of 2018. The musicians were given the opportunity to create the world premiere of a work specially composed for Sonat Vox together with the composer.