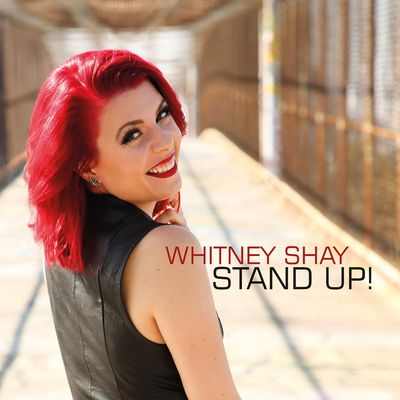 Stand Up! It’s not just an album title, it’s an order, forcing anyone who hears Whitney Shay’s brand of rocket-fuelled R&B onto the dancefloor. A flame-haired stick of dynamite in a sparkling dress, this San Diego phenomenon has made a record for dancing, drinking and dreaming, with songs to soundtrack the peaks and punches of life. “I make high-energy soulful rhythm ‘n’ blues,” she explains, “that makes people dance and feel something deep inside.”

Released in 2020 on Ruf Records, Stand Up! Is sure to mark the global explosion of an award-winning singer-songwriter who’s long been threatening to go ‘boom’. Tracking at Austin’s Wire Recording Studio with producer Kaz Kazanoff, and setting the pace with the title track’s brassy soul and smoky quickfire vocal, this third record’s upbeat moments twist from the rolling groove of Tell The Truth to the dirtied-up funk of P.S. It’s Not About You.

The new material of Stand Up! – penned alongside writing partner Adam J. Eros – might fill the dancefloors, but it also brings you deep into Shay’s headspace, with themes that span from the personal to the socio-political. Whether it’s raucous or wracked with pain, every note on Stand Up! Is real. And whether you play this record at top volume – or catch these tunes live when Shay and her band take Stand Up! Out on the road for Ruf Records’ 2020 Blues Caravan showcase – she’ll have every last listener up on their feet.

“When I perform,” says Shay, “I want people to dance and be engaged. To me, music has always been about catharsis, the purging of sad experiences. If I can make the audience leave smiling and feeling like they’ve forgotten about the troubles of their day, I’ve done my job.”