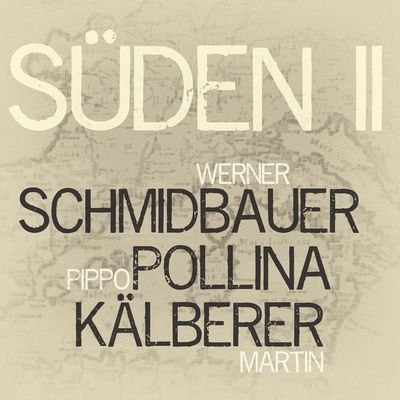 The album "Süden II" of Schmidbauer Pollina Kälberer is not an continuation of a successful concept, it is a new start in the spirit of commonality.

The songs have been fully developed by the three experienced artists. The arrangements are subtle, seem transparent, graceful, in places very private, then offset again with strings and a pinch of pop. It's a special mix. Pippo Pollina is a modern Italian Cantautore with a love for this kind of pathos, as they are known from the French chanson. Werner Schmidbauer combines the ambitious Bavarian singer-songwriting with the tradition of American Folk, and finally Martin Kälberer who is a multi-instrumentalist.

"We do not interfere with each other, we enrich each other and that is something special, it is also our claim that we do not limit ourselves locally and artistically, but want to bring together what we think it does not exclude, "says Martin Kälberer.

The album "Süden II" by Schmidbauer Pollina Kälberer will be released on the 25th of January 2019.