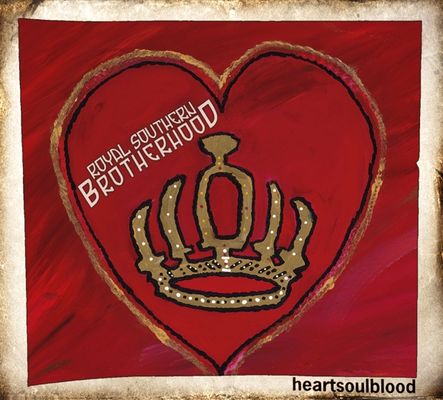 The Brotherhood are back. Some might say they’ve never been away. Two years have passed since 2012’s self-titled debut album, but the genre-splicing all-star Southerners have barely paused for breath.

There’s been the roof-raising world tour, taking in twenty-plus countries. There’s been the classic Songs From The Road live album. Cyril Neville, Devon Allman and Mike Zito have all found time for critically-acclaimed solo releases, while Yonrico Scott and Charlie Wooton have lent their talents to the hottest artists around.

But HeartSoulBlood is the big one. The main event. The one the band describes as the record they really wanted to make. Released 2014 on Ruf Records, this much-anticipated second studio album is set to rubber-stamp Royal Southern Brotherhood’s reputation as the boldest creative force in the game, and give an adrenalin-shot to the band’s setlist as they scorch the tarmac this summer.

HeartSoulBlood. The album title says it all. In a rock industry increasingly driven by sales charts and demographics, this second album is the sound of five world-class musicians following their guts and playing tug-of-war with their eclectic influences, whether that’s funk, soul, old-blues or hard-rock. This is an album made to soundtrack people’s lives.

For HeartSoulBlood, the Brothers returned to the stamping-ground where it all started- the Dockside Studios in Louisiana. And so, reuniting with Jim Gaines – the super-producer who helmed the debut album sessions – and hot-shot engineer David Z, the band returned to Dockside in December 2013 to bottle the sequel. Not only was the spark between the five members still firing, but after two years spent bonding on the road, the interplay on these tracks is tighter and more telepathic than ever.

Respectful of the music’s past, but twisting it into new shapes as they stride boldly into the future, this is one band adding to the story of rock ‘n’ roll – and HeartSoulBlood is the latest thrilling chapter.