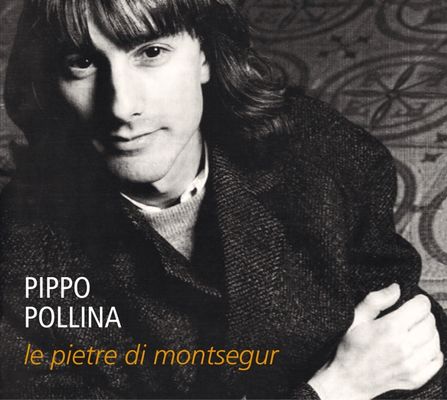 Pippo Pollinas fourth album was an unexpected success. Le Pietre di Montsegur reached the sixth place of the Swiss charts and the radio stations played the single Ehi Che stress! up and down. This album is a masterpiece of Pippo's continuous work. The politically committed artist sings repeatedly against violence, indifference and oblivion.

The album is about the Cathars which had been massacred by the Knights Templar and the Crusaders of Pope Innocent III at the time of the search for the Holy Grail. It's a whip against the peace-loving and civil European cities that sank into mediocrity of everyday life.

Pippo's fourth album is very different compared to its predecessors. Finally it is a mature work without slag and naivety. The songs are linked in a stringent line. The collection of songs is more extensive and heterogeneous: the usual social aspects were not neglected; the songs also roamed the poetry. Elegia ai caduti (Elegy to the fallen), a tribute to Giovanni Falcone and Paolo Borsellino, owned commitment and lyrical character at the same time. Pippo's voice, colored with dark and oblique tones, arose in this song into the mezzo-soprano, while a choir of 25 singers spanned a firmament of feeling and pain about it.

The value of the album lies in the content and in its musical accuracy. Primomaggio (first May) was dedicated to the workers and is the contrast of the commercial song Ehi Che stress!.