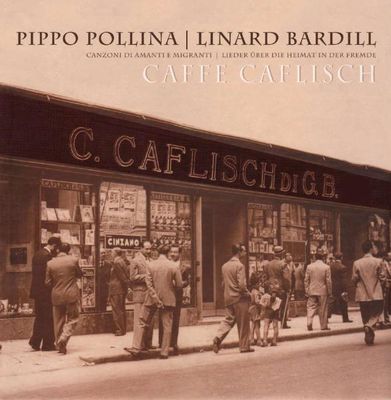 The confectioners from Graubündenweret and still are

legendary. In the beginning of the 20th century they established as emigrants

bakeries, pastry shops, bars and cafes in Amsterdam, Moscow, Dresden or in

Paris. As well Christian Callfisch, who originally came from the canton

Graubünden/Switzerland, did so in Trin. He opened up the famous "Caffè

Caflisch“ in the Sicilian city Palermo around 1900. Pippo Pollina sat

himself for his exam in law. He did not become a jurist. But the jump of the

leopard took place. Because in the novel it is written that the one who tries

his luck has to leave the island. Lampedusa wrote his world famous novel at one

take the big step over the ocean.

Only packed with his guitar and sleeping bag he travelled

through the northern countries of Europe and get caught in Switzerland. Last but

not least because of the songwriter Linard Bardill from Bünden, who got

his tour through Engadin/Graubünden. A friendship was born that lasts already 22

"I nu passaran“ was the name of the program , "they won`t get

through it“, which was about  fascists and racists, people who hate

foreigners and fake patriots. Bardills Rhaeto-Romanic songs were quite

meantime he became an emigrant himself.

After the expanded tour through the alpine area Pollina

in the “Caflisch“: Quello giusto, the real Italian one. Today the Cafe is

fixed in Sicilian hands. The Caflischs returned to Switzerland. But

persons, nearly everywhere and that tolerance and an open mind are the best

on 29. December 2009. At the same time the Swiss TV will broadcast a first

documentary in the show “10 vor 10“ about the album and its explosive issue.

Pollina and Bardill will return on 8. January 2009 with

Hausen am Albis. From January till December 2009 both musicians can be listened

to about 40 times in Germany, Austria, Italy and in Switzerland ( for example in