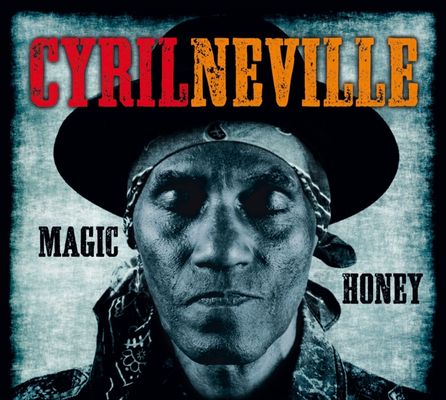 Most artists make albums. Cyril Neville makes gumbos. Served up in August 2013 on Ruf Records, Magic Honey finds the 64-year-old Southern icon on anarchic form, snatching inspiration from a kaleidoscope of sources and shaking up a sonic cocktail where anything goes. I’m extremely proud of this record, notes Cyril of his latest signature dish. It’s a tasteful, well-cooked musical gumbo that I think will be pleasing to the palates of music lovers.

Singer. Poet. Percussionist. Neville Brother, Meters legend, solo star and talisman of the South’s all-conquering new supergroup, Royal Southern Brotherhood. Just as Cyril Neville’s career path keeps you guessing, so Magic Honey defies expectations and breaks out of any pigeonhole you try to place around it. There’s the spring-heeled, funk-flavoured strut of Running Water, the snare-cracking groove of Invisible and the stinging title track (My baby is a queen bee… magic honey dripping from her hive). There’s the amped-up satirical sideswipe of Money and Oil (Don’t matter how you feel, it’s all sell, sell, sell) and the album’s most overtly rock-out moment, Working Man (Got no time for living, ’cos I’m working all the time…). By the time you reach the silver-tongued reggae lilt of Slow Motion and the irresistible dancefloor-filler that is Swamp Funk, you’ll be reminded that Cyril is a songwriter who combines a clear artistic vision with a wandering eye.

Magic Honey is the kind of genre-slipping statement that’s only possible when you’ve got a crack musical squad pulling together, and as Cyril began putting the heat under this gumbo at Studio In The Country, Bogalusa, Louisiana, he was flanked by plenty of capable cooks. On production, David Z created an organic sound on Magic Honey that pulsed and breathed. And he had the best rhythm section he could wish for: 'Mean’ Willie Green (drums), Cranston Clements (guitar), Carl Dufrene (bass) and Norman Caesar (keys).

It’s one hell of a guest-list, and only serves to underline the respect and pulling-power that Cyril Neville has amassed during his four-plus decades in the industry.