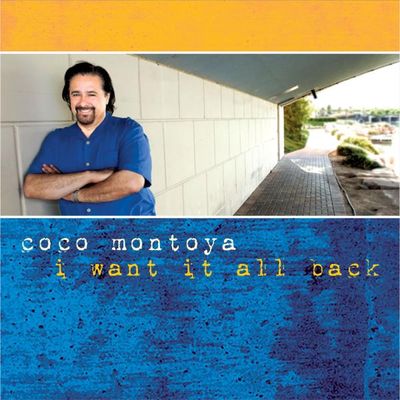 I Want It All Back

“Coco Montoya is at the forefront of the contemporary blues

“He is one of the truly gifted blues artists of his

Long ago, Albert Collins took a young Coco Montoya aside and

told him, “Son, just play what’s in your heart.” That has been Coco’s mantra as

what’s in your heart.” From the opening riffs, Coco Montoya has shed the

familiar and is ready to challenge himself and his audience. His first words

unveil a voice that possesses as much soul as his guitar. That leap of faith, to

trust in his voice, came at suggestion of Coco’s friend and three time Grammy

delivery to articulate the story. The world knows Coco as the blazing guitarist

with the hearts of his audience. By developing Coco’s vocal vulnerability backed

by his aching guitar for the emotional reference, these songs connect faster

than any records Coco has previously recorded.

“People know where I’m at with the guitar, but here the

vocals are being concentrated on,” said Coco. “There will certainly be guitar,

but the focus has been on song structure and my vocals.

“I think it’s healthy to take chances. It’s being able to

humble myself and take direction and guidance. As co-producers, Keb’ and Jeff

Paris have been working extensively with my vocals. I’m very proud of the

performance they’re getting outta me.”

singing while keeping his human compassion and gracious touch. “I want to make a

player,” said Keb’. “I think he has a great voice, but in the past, he’s used

his voice as a way to get to his guitar playing. Here,

the vocals have to be taken seriously for what they are, the most important part