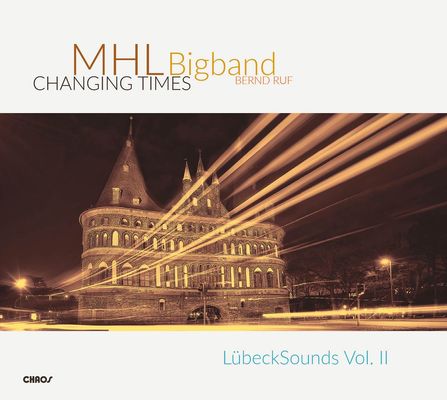 The sound of Bigband Jazz from Lübeck

Northern Germany – not exactly known for its many Jazz musicians – surprises with new creative epiphanies by the Musikhochschule Lübeck and the local Jazz scene. After the debut album „Timeless Changes – LübeckSounds“ by the MHL Bigband that came out in 2014, it received praise from the press for its inventive original compositions. The sequel „Changing Times – LübeckSounds Vol. II“ extends this style to the extreme: concious of the constant change of musical techniques and aesthetics the new album takes inspiration in expressionist fanfares, fusion jazz and electronic dance music.

The MHL Professor for Composition Dieter Mack is known in the New Music scene for his unconventional pieces of music. The roots of the four songs he‘s written for this album - Outrageous, Push, Ngotek and The Second Dark Side – can be found in 70‘s Fusion Jazz, Frank Zappa, Psychedelic Rock and Balinese music.

While only 17 years old the preliminary student Ilja Ruf is the youngest composer on the album. On his Bigband debut song Magic Moments he blends different impulses from funk and latin as well as 80‘s synth sounds to a grand colorful melange.

After graduating from Musikhochschule Lübeck and receiving a degree in Jazz Composition in Bern Hans-Christian Stephan has become an award-winning composer and arranger. In his work 24/7 he portraits the fast pace of modern life in an explosive vintage swing piece. He also teams up with performance artist Christopher Hotti Böhm for Schwarmdefekte: an electronic beat – without electronics. 100 % unplugged.

MHL students Michael Knarr, Kristoph Krabbenhöft and Jon Ander Klein then take a dare with their electronic monument piece Till Your Well that is reminiscent of the LP era because of ist 22-minute length but sounds like a track for urban nightclubs with ist well-crafted mixture of EDM, Bigband sound and choir.