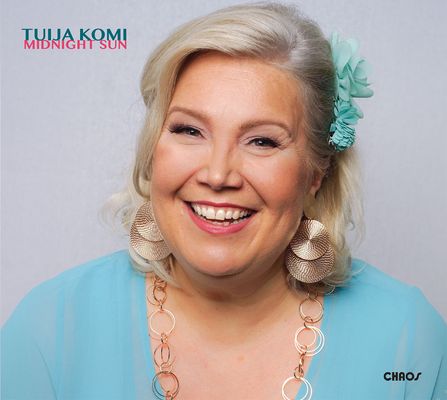 „Sun at midnight must be seen. Cause if you have, you can sing of it with a happy emphasis like the Finn Tuija Komi, who makes an indulgence out of the shining. That's how music can develop, which can connect the charme of the experience of the swing of the north with the enthusiasm for the power of the melodic. An album which is made to smile.” (Ralf Dombrowski)

„Hey – Pippi Langstrumpf...“ But wait... stop...! What's this brave, strong little girl from Sweden doing here? Aren't we rather in Finland, the home country of Tuija Komi, living in Munich, who is presenting us „Midnight Sun“, her new album? The Finnish name of the Sweden brat is Peppi Pitkätossu (spelled as written) – and Tuija Komi sublimates this classic children song to a real jazz hymn.

As empathic as strong-voiced she gives this catchy song that connects several generations a musically new, brilliant robe. With the vocal sequences sung by her in Finnish, she sets a statement to her Finnish origin – a wonderful variety of the classic scat singing. And totally Tuija Komi.

This Independence, this personal characteristic style – both vocally and musically and in the arrangements of the songs – is what gives the album his own special shining. Bravely she puts classics of the pop such as Thank You For The Music (ABBA), You Make Me Feel Brand-new (Simply Red) or It's Too Late (Carole King) next to a Feeling Good which Nina Simone already intoned impressively in 1965. She makes use of the finish pop literature (Suru on kunniavieras) like the beautiful melancholic ballad Gabriella’s Song from the movie „Wie im Himmel“ of the Sweden Stefan Nilsson and tailors an exact text gown for the latin-composition Samba Tzigane from the world-class trumpet player Dusko Goykovich. She finishes the album with If I Had My Life To Live Over, that Bob Eberly already sang – and picks one of her newest own compositions Land Of The Midnight Sun to be the Opener. This musical hommage to her home country developed in the sunkissed italy during a song-writing workshop organised by the Berklee College of Music with 200 participants of all nationality. „This special mix of the south, sun and internationality – which I all love – has apparently triggered my home sickness and brought me back to my nordic roots“, says Tuija about this song.

Midnight sun and darkness for weeks, shine bright and full of high spirits, dusky half-shade and soft melodies – the one thing is already resonating as a memory in the other one. That is Finland – and Tuija Komi is a child of this amazing light-and-shadow-theatre. With a light touch and a enormous voice she turns each of the selected songs in one of her own. Thereby she can rely on her band with Walter Lang (p), Peter Cudek (b) and Martin Kolb (dr), that follows the power-woman Tuija Komi as sensitive as self-confident like a perfectly coordinated orchestra.

(And one thing is sure: If Astrid Lindgren had known Tuija- she would have dedicated her own story to her…!)