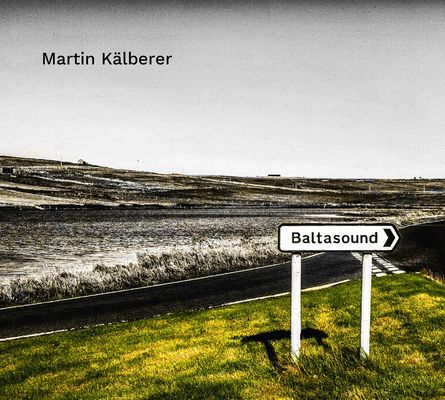 Baltasound is the largest town on the Scottish island of Unst. Years ago, the fishermen romped there, as plenty of herring from the Atlantic were caught, later the place was important in for the oil industry. Baltasound has since fallen asleep. Despite a few people, it is a symbol of loneliness, but also of openness, of the open view. The signage of the album cover therefore does not lead to a lost post, but towards an inspirational space, which challenges its design by its sparse nature. It's about the world in the background, the sound that leads away from the normality of stimulus.

And so it was far out there in which after awhile, Martin Kälberer found the slowing down of the impressions a challenge. In Kälberer's camper, the only instrument to be found was the Hang, that pristine percussion alien with the spherical sound, with which to improvise a bit. The raw material of the impressions then condensed themselves into a compositional process that spanned an acoustic arc over ten chapters.

It was recorded then, in the autumn of 2017, in Kälberer's studio. He did most of the work himself, cellist Fanny Kammerlander was included as a guest, as well as the flugelhorn player Reinhard Greiner, also performing to one piece each were the bassist, Alex Klier, and Werner Schmidbauer as guitarist. It was important that most of the instruments sounded like real instruments, not copies from the computer.