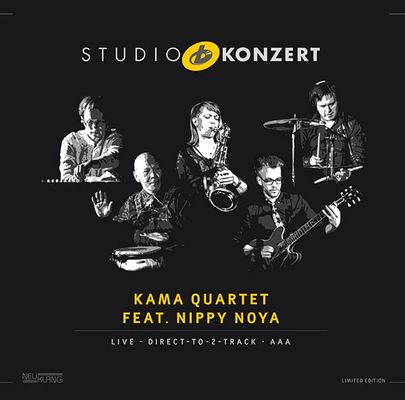 The Studio-Konzert concept is not new for Katharina Maschmeyer and her quartet. In April 2015 they recorded a Studio-Konzert vinyl at the Bauer Studios. Two years later they return to the studios with a legendary guest, conga player Nippy Noya.

The concert is a big challenge: A new interpretation of the unique and complex A Love Supreme suite from John Coltrane, already recorded by the KA MA Quartet as a studio CD and released on the label Neuklang.

No possible postproduction. The artists must show their professionalism and talents from the very beginning. An impressive concert under optimum conditions regarding the quality, recorded by Philipp Heck on a Studer A 820 tape-records.

STUDIO KONZERT is the audiophile Direct-To-2-Track fully analogue recorded concert series, produced by the Bauer Studios since early 2013 and available in shops as numbered and limited 180g vinyl records with a premium-quality packaging.

STUDIO KONZERT: That is our large atmospheric recording room, which inspired numerous first-class artists. That is also extreme concentration and highly motivated artists for this very special moment. It is an attentive audience captivated by the fascination of this moment. This is the only way to create such fascinating moments in a very special concert situation.

STUDIO KONZERT: That are experienced sound engineers who conduct the acoustic brilliance with our first-class studio equipment: precious microphones, analogue effect devices and our clear, analogue Neve mixing console. Our Studer A 820 tape-records in a unique direct-to-2-track way.