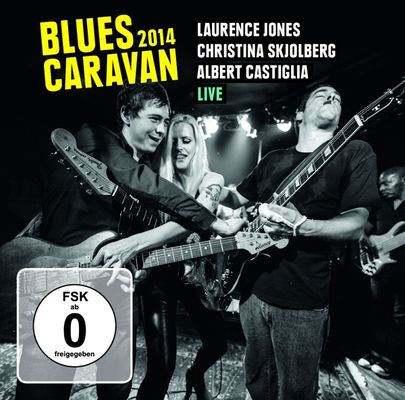 The Blues Caravan is on a roll. Now in its 10th triumphant year, Ruf’s touring showcase of new talent is sticking with the winning formula that has made it an institution. One stage. Three artists on the brink of greatness. And a crowd strapped in for the night of their lives. With an illustrious roll call of past alumni including Ana Popovic, Oli Brown and Joanne Shaw Taylor, the Blues Caravan has al-ways been a golden ticket to catch the scene’s next-big-things before they explode onto the world stage.

This CD/DVD set of 2014’s Blues Caravan featuring Albert Castiglia, Laurence Jones and Eliana Cargnelutti was recorded in the Harmonie in Bonn, Germany on February 9th 2014. It is the prefect souvenir of a rocking anniversary Caravan, bursting with energy.