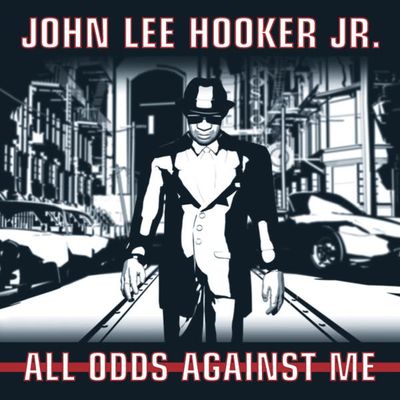 All Odds Against Me

Delta blues-filled blood running through his Motown veins. The son of the great

John Lee Hooker, he was exposed the life of the blues from a young age. At only

musician. Touring alongside Sr. throughout his teens, Jr. had already performed

was singing vocals alongside his father for the recording of Hooker, Sr.’s album

As Jr. Hooker prepares for his third release, All Odds

Against Me, he continues to carry blues into the 21st century. The 12-song

album, to be released domestically on Jr. Hooker’s own Stepping Stone Records

and in Europe on Jazzhaus Records, is his first effort to include only new and

original tracks, a contrast to either of his previous solo projects.

animated superhero in a cartoon included on the enhanced disc. The first episode

of “Bluesman” introduces Jr. Hooker. as a crime-fighting musician, singing in

clubs by night and cleaning up the streets by day. Conceived by Frenchman

Laurent Mercier at the Callicore Animation Studios in Paris, the video series

has also inspired work to begin on a comic book. Mercier, son of a French

jazzman contemporary of Hooker Sr., dreamt up the idea as a way for the two sons

to pay tribute to their fathers’ legacies and Jr. immediately embraced the

vision. Set to “Blues Ain’t Nothing but a Pimp” from Blues with a Vengeance, the

video is the first of three to be released in 2008. John Jr. will be touring in

support of All Odds Against Me across the United States, Europe, and Turkey

throughout 2008. Joined on the road by Mike Rogers (drums), Brian James

will be bringing the next generation of blues to the world. From the gravely

blues of the Detroit streets to a new era of sound; from the shadow of his

father’s accomplishments to standing apart from his namesake; from criminal to

crime-fighter; from San Quentin to the red carpet, its no wonder the album is

called All Odds Against Me. John Lee Hooker Jr. has built upon his colorful past

as he continues to distinguish himself as a contemporary “Bluesman“.