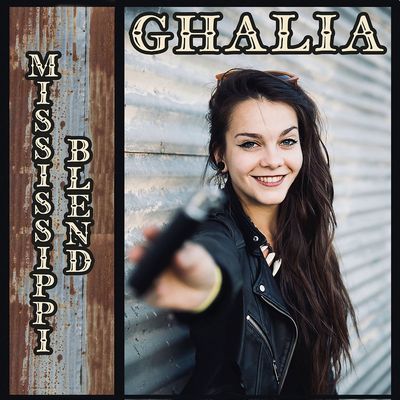 You can’t miss Ghalia. She’s the natural-born rock star with the leather jacket and wicked grin, leaning from her album sleeve to offer you a hit on her hip flask. But the real Southern blend ain’t in the bottle, it’s on the songs. Following the New Orleans flavours of her 2017 breakthrough, Let The Demons Out, this year sees the acclaimed Brussels-born singer-songwriter dive deeper into the American South, recording in the hill country of Mississippi, where she shared her songs with a cast of esteemed local musicians and caught the flying sparks. This is Mississippi Blend: an album as fiery and throat-burning as Delta moonshine.

Like any musician with the blues under their fingernails, Ghalia always burned to make a record in Mississippi. Right from the start, her vision for Mississippi Blend was clear. This was to be an album so raw it bled, recorded deep in the hill country, letting all the region’s favourite sons add their thumbprint and catching the vibe that blew on the breeze. There was only studio that fit the bill. Owned and operated by award-winning producer Jim Dickinson, the Zebra Ranch in Coldwater, Mississippi, is a beacon of old-school production, where titans from T-Model Ford to R.L. Burnside have torn it up. But rather than being overawed by the studio’s history, Ghalia stepped up with her own songs and attitude, immersed in Mississippi spirit.

But Mississippi Blend is anything but a one-woman show. As on Let The Demons Out, bassist Dean Zucchero and guitarist Smokehouse Brown were the engine room, while every morning saw the singer welcome a new guest. On drums, you’ll find Cody Dickinson of the feted North Mississippi Allstars, alternating with Cedric Burnside, whose feel on the hill country-flavoured tunes would have made both his late father and grandfather proud. The veteran harp-blower Watermelon Slim duets with Ghalia on the dusty-road groove of Wade In The Water, while Lightnin’ Malcolm – a guitarist credited with keeping the hill country scene so healthy – plays searing leads.

By all means, take a slug on her hip flask. But don’t forget to play Mississippi Blend – and fall for the most powerful cocktail of star players and roots styles you’ll hear this year. “I just can't wait,” says the singer, “to share this new album live…”