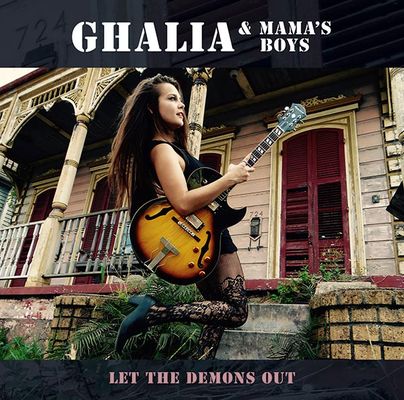 Let The Demons Out

Some albums stop you in your tracks. Like the smoky thump from a New Orleans juke-joint as you pass by on the sidewalk, Let The Demons Out is a rock ‘n’ roll siren call that pricks up your ears and puts you under its spell. And with Europe’s fastest-rising young vocalist and Louisiana’s hottest R&B crack-squad running the show, resistance is useless.

If you’ve not yet met Ghalia Vauthier, prepare to fall hard for an artist on the cusp of big things. Ghalia soon set herself the biggest one of all: America.

Every state heralded a new adventure, but perhaps most pivotal was Louisiana, where the seeds of Let The Demons Out were sown as Ghalia fell in with local legends Johnny Mastro & Mama’s Boys. The chemistry between these fast friends was undeniable, and it spilled over into New Orleans’ Music Shed Studio, as Ghalia drafted the lineup as her studio band. “The goal was to mix their attitude and experience with my songs and vocals,” she explains, “creating a symbiosis and letting the musical chemistry blossom.”

In an era of manufactured music, Let The Demons Out is as real as it gets. Mama’s Boys provide the engine-room on these twelve tracks, with sparks flying between Mastro’s gale-force harp, Smokehouse Brown’s stinger guitars, the grooving bass of Dean Zucchero and the visceral beats of Rob Lee. Leading the line, meanwhile, is Ghalia’s astonishing vocal, which somersaults from a honeyed purr to a hollered battlecry.