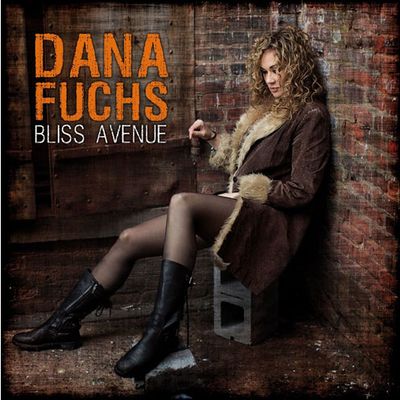 Released in July 2013 on Ruf Records, Bliss Avenue is the most honest and unflinching studio album in Dana’s back catalogue.

Once again co-written alongside her long-time wingman and guitarist Jon Diamond, these songs weren’t simply tracked in box-ticking fashion, but wrenched from the depths and laid down without gloss or polish. If there’s one line that sounds thrown away or dialed in, it has to be redone, says Dana. Every word needs to express the emotion of the song or no one will get it and it leaves me cold.

I want this album to reach people in a way that’s meant to be inclusive. Not like, ‘Here’s my world and my story,’ but rather, ‘Here’s my story, can you relate…?

Safe to say, you will. It’s impossible not to be reeled in, both by the songwriting and execution of Bliss Avenue. Led from the front by Dana’s smoke-and-honey battle cry, these twelve new cuts are also a canvass for some of the best musicians on the US scene, with Diamond’s powerhouse guitar offering intelligence and groove, Jack Daley delivering seismic bass, keys wizard Glenn Patscha working the Hammond, Wurlitzer and piano, drum god Shawn Pelton keeping the train on the track – plus atmospheric background vocals from Tabitha Fair and Nicki Richards.

Locking in with Dana and Jon’s self-production, this musical dream team flew across a tracklisting that takes in flavours including soul, roots, blues and southern rock.

I realised that you have to hire the best musicians to help you reach your vision, she nods. It’s such a collaborative effort.