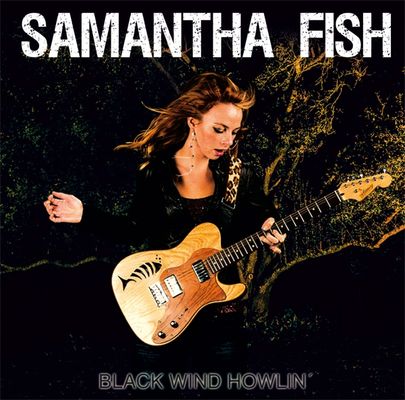 Take cover: there’s a storm coming. With its lyrical thunderbolts, lightning-flash fretwork and ground-shaking grooves, Black Wind Howlin’ is a record to blow your roof off – and Samantha Fish is stood at the eye of the hurricane. Released on September 20th through Ruf Records, Black Wind Howlin’ flips a finger at the cliché of the ‘difficult second album’, firing off 12 classic tracks that chart Samantha’s evolution as songwriter, gunslinger and lyricist.

While lesser artists work to a template or settle into a pigeonhole, Samantha shifts her shape across the Black Wind Howlin’ tracklisting. She can be brutally rocking on cuts like the tourbus snapshot of Miles To Go (Twelve hours to Reno/ten hours til the next show), the swaggering Sucker Born (Vegas left me weary, LA bled me dry/skating on fumes as I crossed the Nevada line…) and the venomous Go To Hell (Oh, this ain’t my first rodeo/You hit yourself a dead end/Your voodoo eyes, ain’t gonna cast a spell/So you can go to hell!).

And yet, elsewhere, backed by the versatile production of Royal Southern Brotherhood guitarist and longtime collaborator Mike Zito, you’ll find Samantha shifting gears to the aching slide-guitar balladry of Over You (Echoing words, said I’d never make it on my own…) and the redemptive country strum Last September (Don’t remember the curves of my face/Can’t feel the warmth in my embrace/Well I’m here to remind you…).

She might stop off for a gritty cover of Howlin’ Wolf’s Who’s Been Talkin’, and co-wrote Go To Hell with Zito, but all other tracks are Samantha’s self-penned originals, and it’s a mix to keep listeners on their toes. I wanted this record to have a modern rocking sound, she explains of the light-footed vibe. I also wanted it to have elements of Americana, country and roots.

So here it is. Harder, darker, bolder and better than even ist revered predecessor (Runaway), this is the sound of an artist on the brink of the huge-time with both hands on the wheel.