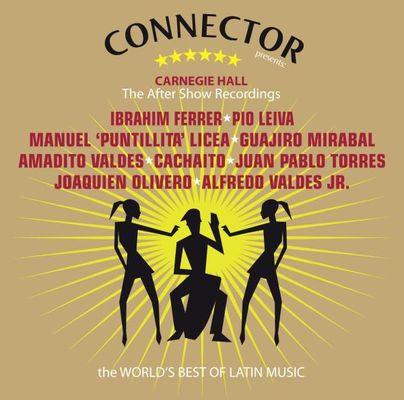 Carnegie Hall "The After Show Recordings"

During the spring of 1998, the Buena Vista Social Club

performed on a National Tour of the US. The Tour´s exclamation point came with a

knight, the members of the troupe took the stage to a standing ovation. Their

performance was exhilarating, they were, after all, in the World´s premiere

stage, these old pros, who at one point thought their life´s work had been

forgotten, even in their native Island. They never thought they would receive

the performance ended. The story, however, doesn´t end there. What happened

later in the evening, in the full context of Cuba´s musical history was just as

For Years, mostly of political reasons, Cuban musicians had

not recorded with their counterparts living outside the Island, particularly

with those living in the United States.

A studio session was arranged, and due to time constraints,

Ben Lapidus, Elsa Torres and others in taping “CARNEGIE HALL - THE AFTER SHOW