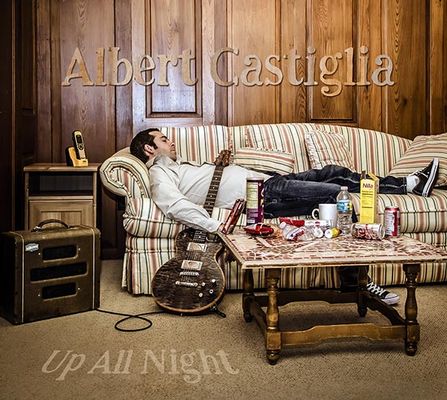 Up All Night. It’s an apt title for Albert Castiglia’s seventh album: nobody sleeps when this man is in town. After 27 years of house-rocking studio albums and smack-in-the-mouth live shows, the Florida bandleader is the acknowledged master of red-raw, sweat-and-hair blues that gives it to you straight. Now, the visceral riffs and bruised soul of Up All Night make everything else sound like a lullaby. “I’d describe the musical vibe of this new album,” says Castiglia simply, “as heavy.”

Released in 2017 on Ruf Records, Up All Night finds Castiglia in a creative swagger after last year’s acclaimed Big Dog. What wasn’t broke then hasn’t been fixed now, with the bluesman once again recording at Dockside Studios, Louisiana, and capturing a warts-and-all mix alongside producer Mike Zito.

Up All Night is what happens when fist-tight chemistry meets a songwriter firing on all cylinders. Flying out of the blocks and bottling ten songs on the first day, Castiglia shook the Dockside walls with the most powerful songs of his career. That back catalogue is a high bar, but Up All Night raises it, defying you to sleep until you’ve worn out ist 11 magnetic tracks. “You’ll rock out and dance like nobody’s watching,” concludes Albert. “If you’re sad, this record will lift you up. If you’re already happy, this album will make you happier. You can listen to this album anywhere, anytime…”