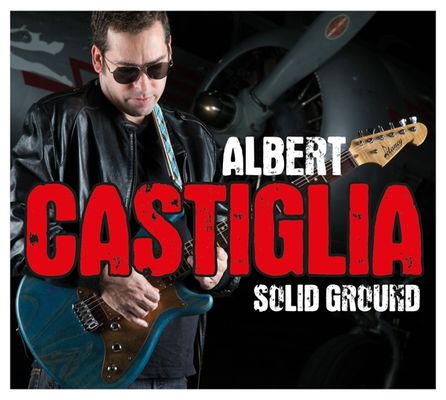 Rock ‘n’ roll is a conveyor belt. Every year, another bright young thing, famous for a finger-snap, then forgotten forever. Albert Castiglia has walked a different path. As the man who once sang, The road to riches is playing guitar, that’s why I’m living inside my car, he’s spent two decades climbing the greasy pole and paying dues with interest. Now, Solid Ground is payback.

Released in February 2014 as Albert’s debut album for Ruf Records, Solid Ground will let the global blues-rock scene discover what the hardcore fans have known from the start. Namely, that here is an artist who sings from the gut, shoots guitar licks from the hip and writes songs that articulate your hopes, fears and heartaches. Solid Ground is my best album to date, says the 44-year-old bandleader, simply. I put more time, love, blood, sweat and tears into this recording than any of the others, and it shows. I love every song on it and I’m sure there’ll be something for everyone to like.

He’s right. Recorded at Fat Rabbit Studios in Glen Ridge, New Jersey, this album isn’t just solid, it’s special. There are plenty of thrills in the musical execution, with Albert leading the line on vocals and guitar, backed by the crack team of Matt Schuler (bass/vocals), Bob Amsel (drums), Jeremy Baum (B3/piano/wurlitzer), Lou Bevere (guitar/vocals) and Debbie Davies (guitar/vocals) – plus Dave Gross on multi-instrumentation and production. Ultimately, though, the real stars of the sessions are Solid Ground’s 14 songs.

Surfing on the buzz from press and public, supported by a major touring campaign and bolstered by Ruf’s marketing muscle, Solid Ground is the game-changer and the giant leap. You can keep your bright young things and your overnight success stories. Albert Castiglia is a talent built to last.