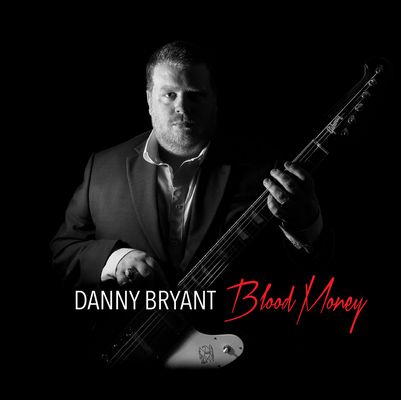 “Working with Bernie Marsden and Walter Trout on this album has been a career highlight for me.”

His third album to be produced by Richard Hammerton, following in the footsteps of 2014’s Temperature Rising and 2012’s Hurricane, the new album features Danny collaborating with Walter Trout and Bernie Marsden on two tracks.

Says Bryant, “I wanted to make this album ever since I began my musical journey 20 years ago as a 15 year old boy who fell in love with his parent’s record collection.”

On Blood Money, Bryant set out to record an album that showed an introspective return to his roots and an appreciation of his blues influences, by paying homage, as he puts it “to all the different influences and flavours of this wonderful music that I have loved for many years.”

Particular tracks like ‘On the Rocks’ is a homage to the late great Albert Collins, ‘Holding All The Cards’ is a tribute to Jimmy Reed, while ‘Unchained’ harks back to vintage Albert King Stax recordings.

The title track, ‘Blood Money’, was a song that Bryant had on the fire for several years. He just needed the right time and the right collaborator to bring the song to life. This particular song was specifically written with Walter Trout in mind, who was Bryant’s guitar mentor when he had a chance meeting with him at a concert when he was only 14 years old.

“I wanted us to share the song with Walter,” says Bryant. “I am really thrilled that he agreed to play guitar on the track. I think his contribution is truly stunning.”

Another highlight of the Blood Money recording sessions was the contribution from Mr Bernie Marsden. One of Bryant’s all-time favourite guitarists and singer-songwriters, Bryant invited Marsden to record a special ballad that Bryant had written entitled ‘Just Won’t burn’. The song was recorded in one afternoon and during the recording, Bryant got the opportunity to play Marsden’s famous 1959 Les Paul -‘The Beast’.