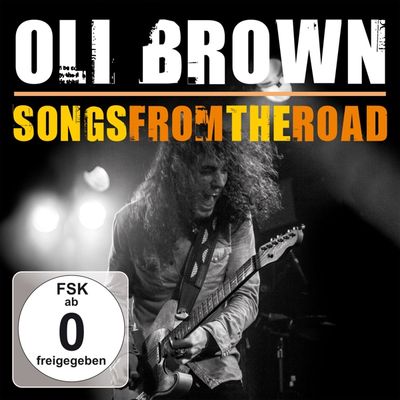 Oli Brown is a man in motion. The world knows his name. The circuit knows his reputation. His mission to bring blues-rock to the people has seen him cross continents, tear through time zones and break language barriers. And yet, no matter how far the tour bus takes him, Oli has never forgotten his roots, nor the city that put him on his musical path. As such, on December 16, 2012, the bluesman who once stood in a Norwich schoolyard dreaming of a record deal returned as a conquering hero for a hometown gig like no other.

Of course, Oli has returned to Norwich for triumphant end-of-year shows many times in the past, rewarding his loyal hometown fans for their support through the blood, sweat and slog of the early years. And yet, this time, the stakes were even higher, and the atmosphere still more electric, as the bandleader hit the city’s Waterfront venue with a recording crew, intent on capturing his live set as the latest release in Ruf Records’ legendary Songs From The Road series. I really wanted to record my live show in Norwich, explained the bluesman, as everyone there has been so good to me.

Released in June 2013 as a CD/DVD set, Songs From The Road catches Oli at the top of his game, as he draws on an all-killer setlist that mines all three classic albums that fuelled his ascent. From his scorching 2008 debut, Open Road, there’s the irresistible groove of Stone Cold. From 2010’s lauded follow-up, Heads I Win Tails You Lose, there’s the heart-in-mouth Speechless, while from 2012’s game-changing Here I Am, the Waterfront roof is raised by cuts like Thinking About Her, Manic Bloom and Devil In Me. With the set also taking in new songs like Love Is Taking Its Toll, Songs From The Road is both a testament to the heights he’s already hit and a signpost to the thrillride ahead.