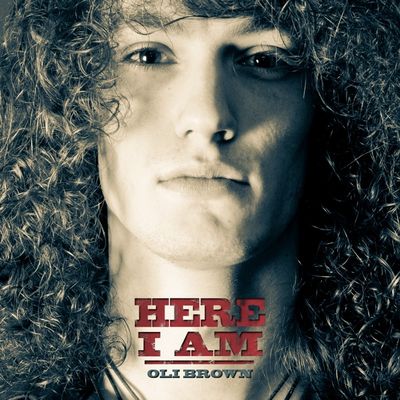 So here he is. The great white hope of British guitar. The young man blues sensation. The rock ‘n’ roll alchemist who fires a bullet-belt of influences into the mix. The heart-on-sleeve songwriter who bleeds onto the lyric sheet and solos like his soul is hard-wired to his fingers. The mover, shaker and rule-breaker, who drags the dusty conventions of the blues into the millennium by the hair.

But if you thought you knew the real Oli Brown, you don’t know the half of it. Please allow him to introduce himself. Three albums into his career, Here I Am finds Oli letting down the barriers, showing his cards, turning the spotlight on himself and defying you to turn off your stereo. “The new album is called Here I Am,” he explains, “because I’m saying, ‘this is me’. People know when something isn’t believable. I’m just trying to be honest.”

Here I Am is the sound of an artist on the crest of a wave. When Oli hit the studio in Nottingham after a triumphant 2011, he had the plaudits of fans, press, peers and heroes ringing in his ears, a truck-load of trophies and a huge weight of expectation. Most 22-year-olds would have felt pressure, but with his dream team around him – drummer/producer Wayne Proctor and bassist Scott Barnes – Oli rode the red light and chased down 12 classic songs to hand over to Magic Garden Mastering’s Brian Lacey (fresh from The Black Keys’ El Camino album).

It’s a tracklisting that runs the gauntlet, from Thinking About Her’s grooving ode to a seductress, past the desolate break-up blues of All We Had To Give, to the stinger missile Solid Ground that features Paul Jones on harmonica and signs off the album with a slam-dunk. “Ain’t tryin’ to be no Jimi or Stevie, I wanna be my goddamn self,” Oli roars on the title track, and even on covers of Donny Hathaway’s I Love You More Than You’ll Ever Know and Nikka Costa’s Like A Feather, he has both hands on the wheel. Oli Brown has stepped it up. Again.

It’s a long climb from the schoolyards of Norwich to the top table of the British blues scene, and hard to believe that Oli Brown has scaled it in just four years. “I didn’t have any career ambitions until I started playing guitar in 2002,” he notes. “Blues was always in the background, but what really hit was the first Stevie Ray Vaughan album I bought. When I started playing, Hendrix was my first influence. He was a showman, too, setting his guitar alight. I’ve never done that!”

With his chops primed, Oli soon went public, playing impromptu Norwich jam nights where “we didn’t even know what we were playing, but it taught me a lot”. The pivotal moment came at 15, when he was invited to the US as the guest of Blinddog Smokin’: a support slot that morphed into a mentoring scheme, with Oli sharing bills with Buddy Guy and Taj Mahal, and being schooled after-hours by his hosts. “Before that, I didn’t care what the music was, I just wanted to solo,” he admits. “But while I was out there, they taught me everything about the blues, about stagecraft, about walking tall and speaking to the audience.”

Oli would return to the US with Blinddog Smokin’ several times, while he also cites the wisdom imparted by legends including Robben Ford, John Mayall and Walter Trout. Fast-forward to 2008, though, and the student had become the master, and when Ruf Records label boss Thomas Ruf witnessed an explosive UK gig he signed Oli on the spot. Things moved fast. That same year, the precocious bandleader burst out of the blocks with Open Road: a dazzling opening shot that fused funky cuts like Psycho with heart-rending solo showcases like Missing You. “There aren’t many 12-bars on there,” Oli said in 2008. “I try to get across a few different styles, but I haven’t had any purists shout at me yet!”

So it began. With that first release, the press woke up to what live blues fanatics knew already, and promptly showered Oli with champagne, with Blues Matters! voting Open Road the #2 album of 2008, and Classic Rock declaring the singer had “the blues under his fingernails like few of his peers”. The flattery stepped up a gear when the Oli Brown Band became the only British act selected for 2008’s International Blues Convention in Memphis, and some measure of his exploding profile came when Oli was invited by John Fry of Ardent Studios to record a live session… which scored 1.3 million hits in under a month.

The buzz was building, and by 2010, it caught the ear of legendary British producer Mike Vernon, the veteran of such benchmarks as 1966’s Blues Breakers With Eric Clapton, who was lured out of semi-retirement to helm second album, Heads I Win Tails You Lose, and capture a light-footed tracklisting that mixed up scuttle-buttin’ grooves like Evil Soul and room-shakers like Real Good Time. On release in April 2010, it was clear this kid was more than alright, and the press duly threw star ratings like confetti, with Mojo dubbing Oli “the hottest young pistol in British blues”, Uncut praising “a British bluesman to rival Trucks and Bonamassa”, and Classic Rock voting Heads I Win #3 blues album of the year.

With the 2010 British Blues Awards toasting him as Best Male Vocalist and Best Young Artist, some musicians would have rested on their laurels and watched the royalties roll in. Not Oli Brown. He once said that “blues needs to be heard live”, and it’s true that while he tears it up in the studio, his natural habitat is the darkened stage and his favourite sound the roar of the crowd as he blasts songs skyward with his signature Vanquish guitar. In 2011, Oli toured the UK, Europe, New Zealand, Canada and America – even charming Uncle Sam with a high-profile breakfast TV appearance – and scored another haul of trophies at the British Blues Awards (Best Band and Best Album). The year concluded in schoolboy fantasy-style, playing 25 gigs with John Mayall. Somebody pinch him…

So where do you go when you’ve hit the top? The answer, for Oli Brown, is back on the road, as he supports the April release of Here I Am with a major UK headline tour. For this 22-year-old, blues isn’t just a job, an easy pay-cheque or a shot at cheap celebrity: it’s his passion, driving force and raison-d’être. “I picked the wrong genre of music to be a celebrity,” Oli laughs. “I just wanted to be a credible musician and get respect from people.” With Here I Am, it’s mission accomplished.