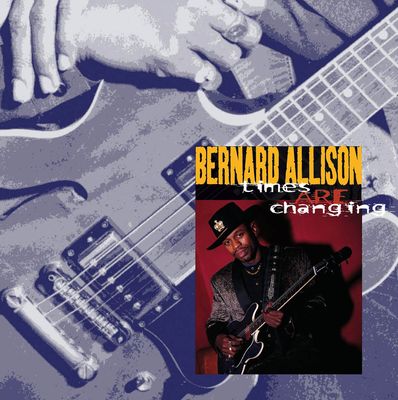 Born in Chicago on November 26th, 1965, BERNARD ALLISON was first introduced to the roots of black music and the art of the electric guitar by his father, the 1997 died, great LUTHER ALLISON.

"I didn't start to play 'til I was maybe 10 years of age" BERNARD recalled "I picked up the guitar, listened to records. I was in grade school and I played with the high school jazz band. They thought I was reading the sheet music, but actually I was making up everything I could play."

At the age of 20 he played guitar support for two years for the Queen Of The Blues KOKO TAYLOR and took part in countless sessions with such musicians as WILLIE DIXON, JOHNNY WINTER (who tought Bernard to play Slideguitar), STEVIE RAY VAUGHAN, JEFF HEALY and COLIN JAMES (to name a few).

LUTHER ALLISON asked his son to join his tourband and become his bandleader in 1989 after a furious collaboration as "Father & Son" at the year's Chicago Blues Festival. A recording from this period can be heard on the LUTHER ALLISON album Let's Try It Again (Ruf 1028).

Bernards previous album Born With The Blues was a solid, stirring and straight-ahead blues affair with fine support from keyboard wizzard (and Rounder Records Bullseye producer RON LEVY and the killer band of BUDDY GUY. That album and subsequent European and USA touring won Bernard much praise from the critics and many new fans.

For the brandnew album Times Are Changing, Bernard is joined on vocals and harmonica by BOBBY RUSH (on In The Morning) and the production chair is occupied by JIM GAINES. Bernard brews up his unique mix of blues, R&B and funk with a flair and blues feeling that makes Times Are Changing his most confident, blistering and funky recording.