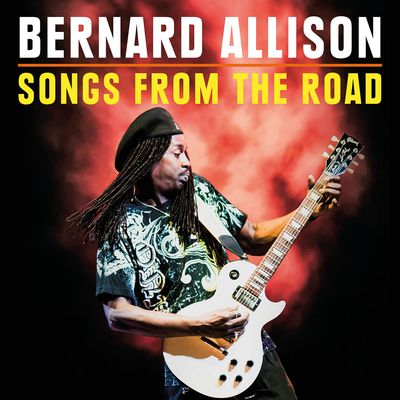 The great Chicago bluesman Luther Allison lived by a simple philosophy that he was happy to share (“Leave your ego, play the music, love the people”). Now, twenty-three years after Luther’s passing, the great man would surely be thrilled to hear Bernard Allison’s Songs From The Road, and proud to find that his ferociously talented son is sworn to the same mission, bringing soul-soaked, all-guns-blazing blues to audiences who need it more than ever.

Released in January 2020 as a CD/DVD set on Ruf Records, Songs From The Road is a live snapshot so raw and real that hearing it feels like hanging off the security barrier of Dortmund’s Musiktheater Piano club when Bernard and his crack-squad band hit town last October 23rd. With an A-list crew on-hand – and a dynamic mix from industry legend Jim Gaines – this immersive recording catches every last flash of virtuosity, bead of sweat and drop of atmosphere.

Since he embarked on his acclaimed solo career with 1990’s The Next Generation, Bernard’s studio catalogue has been heavy with highlights, and that night in Germany, every fan in the house got something off their wish-list. This prolific songwriter reminded us that his recent output is his strongest to date, with five cuts from last year’s acclaimed Let It Go. But Bernard is happy to embrace his past glories, too, on a setlist that spans from 1998’s Times Are Changing to 2015’s In The Mix – and gives long-standing fans a treat with Let’s Try It Again, borrowed from his father’s classic 1984 album, Life Is A Bitch.

You might know the songs – but you don’t know these interpretations. With Bernard leading the lineup on vocals and searing lead guitar, backed by Dylan Salfer (guitar), George Moye (bass), Mario Dawson (drums) and José James (sax/percussion), this is a live band whose chemistry lets them stretch out and shake up these classic songs.

On Songs From The Road, the result is a glorious exchange of energy between band and crowd – and evidence that Luther’s old philosophy is burning brighter than ever. “Our shows aren’t like going to the movies and staring at the big screen,” Bernard considers. “We’re there for the people to enjoy each other’s stories for the evening.”